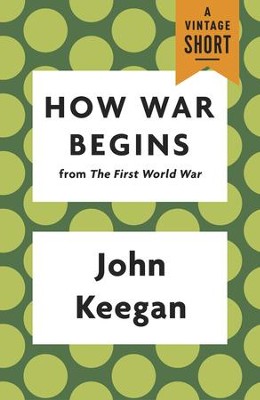 ▼▲
From the dean of modern military historians, John Keegan: a key selection from his masterpiece, The First World War. The road to World War I, from the death of the archduke to the first salvos of battle, an incredibly thorough and straightforward account of how a supposedly rational liberal Europe became engulfed by war.

Everyone remembers the powder keg, the assassination of Archduke Ferdinand and his wife by Serbian national Gavrilo Princip; but what about the fact that a full month elapsed between Princip’s deed and the actual beginning of war? Or that the German Kaiser spent much of that time on his imperial yacht Hohenzollern, on his annual cruise in the Norwegian fjords? John Keegan explains in careful and fascinating detail how exactly the war began, taking the reader through this fateful and exciting month of diplomatic back and forth, last-minute near-saves, and ultimate failure.

▼▲
John Keegan’s books include The Iraq War, Intelligence in War, The First World War, The Battle for History, The Face of Battle, War and Our World, The Masks of Command, Fields of Battle, and A History of Warfare. He was the defense editor of The Daily Telegraph (London). He lived in Wiltshire, England, until his death in 2012.

▼▲
I'm the author/artist and I want to review How War Begins: from The First World War / Digital original - eBook.
Back
Back