Skip to main content
Small Beginnings: The Remarkable True Story of a Boy Overcoming Rejection, to a Man on a Mission Caring for Children on the West Bank an
By: Dennis R. McLeod
Stock No: WW40820X 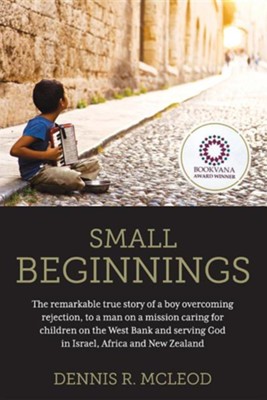 Small Beginnings: The Remarkable True Story of a Boy Overcoming Rejection, to a Man on a Mission Caring for Children on the West Bank an

Small Beginnings shows how a life can be turned around and fulfilled... if we stop and listen to what God has planned for us.

How did a young child who suffered verbal abuse and rejection become a soldier in the army, a top teacher at technical trade school, a missionary to Israel and Africa and then the director of Christian Friends of Israel
in New Zealand?

The author knows how it feels to be rejected and forgotten, but he didn't let his tough start in life dictate his future. This hard-to-put-down true story shows how God called a young man and directed his paths.

With his beloved wife Penny alongside him, Dennis undertakes adventure after adventure... including delivering a young Arab boy home through the dangerous West Bank, returning in the dead of night He travelled to many countries including Africa and America to do God's bidding, was called to oversee a vital ministry and pastor a local church.

Small Beginnings takes you on an exciting journey of discovery that you will never be truly rejected when
you know God and have faith in His love.

▼▲
I'm the author/artist and I want to review Small Beginnings: The Remarkable True Story of a Boy Overcoming Rejection, to a Man on a Mission Caring for Children on the West Bank an.
Back