Skip to main content
SPRING CYBER EVENT STARTS NOW: And it's a really BIG deal! Up to 88% off through 5/24>
The God of New Beginnings: How the Power of Relationship Brings Hope and Redeems Lives - eBook
By: Matt Roberts, Dean Merrill
Stock No: WW96157EB 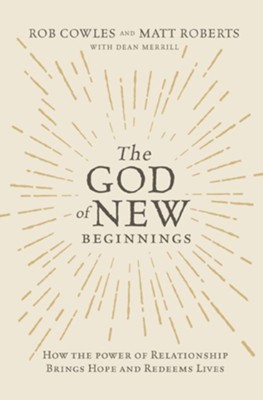 The God of New Beginnings: How the Power of Relationship Brings Hope and Redeems Lives - eBook

Nearly everyone has someone in their circle of acquaintances who struggles—an out-of-control friend or relative whose habits or relationships are in chaos. Is there any hope, or is he or she doomed to self-destruction?

Pastors Rob Cowles and Matt Roberts say God is equal to the challenge! New beginnings are possible, no matter how broken, devastated, or crazy someone’s life may be. Yet today’s churches don’t do messy very well.

The Genesis Project is a network of believers whose goal is to plant churches in dark places, targeting people who don’t normally "do" church. Reaching drug addicts, convicts, strippers, and gang members, they’ve seen God do some amazing things with seemingly hopeless lives. The God of New Beginnings tells these dramatic stories, offering practical wisdom for breaking through the darkness in a person’s life:

Pursuing real relationships    Opening up true stories    Pulling together safe communities    Getting honest about sin    Extending God’s forgiveness and freedom    Helping people reset their lives and habits    Coping with ongoing complications    Not giving up when setbacks occur    Freely sharing the victories    Keeping the faith life simple Love never fails. And when we incorporate God’s love into our lives and relationships, redemption is possible.

Matt Roberts is the founding/lead pastor of Genesis Project in Ogden, Utah, a church that has grown from one local site to become a model in multiple cities and towns across the United States. He began his ministry as a youth pastor in the inner cities of Tampa, Fla. and Portland, Ore. In addition to his present ministry in Utah, Matt has consulted with various churches and denominations seeking to reach dark areas with the hope of Jesus. He and his wife, Candice, are the parents of four sons.

Rob Cowles is the founding/lead pastor of the Genesis Project in Fort Collins, Colorado. He has served in full- time pastoral ministry since 1988, including roles as senior pastor of Radiant Church (Colorado Springs) and executive pastor of Timberline Church (Fort Collins). He and his wife, Joy, use some of their spare time to carve canyons on their Harley- Davidson motorcycle. They have two adult sons.

Dean Merrill is the author and coauthor of 46 books, including Sinners in the Hands of an Angry Church and three other Jim Cymbala titles: Fresh Faith, Fresh Power, and You Were Made for More. He and his wife live in Colorado Springs, Colorado.

▼▲
I'm the author/artist and I want to review The God of New Beginnings: How the Power of Relationship Brings Hope and Redeems Lives - eBook.
Back
Back