We are OPEN and SHIPPING - click here for shipping estimates
PRE-SUMMER CYBER SALE EXTENDED thru 6/1 ~ Over 2,500 items up to 90% off
The Beginning of the World: A Scientific Study of Genesis 1-11 - eBook
By: Henry M. Morris 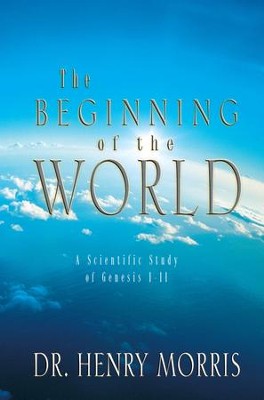 The Beginning of the World: A Scientific Study of Genesis 1-11 - eBook

▼▲
This handy study of Genesis 1-11 gives insightful commentary into the stories most often labeled as myth such as a literal six-day creation, a young earth and a worldwide cataclysmic flood in the days of Noah. Morris details amazing evidence that the first 11 chapters of Genesis are literal history that shapes us today. In this book, both the scientific and historical aspects of these issues as well as their evangelistic and practical spiritual applications are discussed at length.

A handy study of Genesis 1-11, this book gives insightful commentary into the stories most often labeled as "myth" by those who want to chip away at the Bible. Morris details amazing evidence that the first 11 chapters of Genesis are literal history that shapes us today.

A prolific and influential scholar known to believers and skeptics alike as "the father of modern creation science," Dr. Henry M. Morris truly was a man of science and a staunch man of God. He was even said to have set the terms of debate about evolution for the second half of the 20th century by one Pulitzer Prize-winning academician. Dr. Morris began his serious study of the Bible in the 1930s and authoring books in the 1940s, but it was his landmark work, co-authored with Dr. John Whitcomb, titled The Genesis Flood in 1961 that influenced generations to begin discovering the fallacies of evolution and the biblical truth of creation.

With over 60 books, founding and leading the Institute for Creation Research (ICR), Dr. Morris’ death in 2006 was a profound loss to millions.

Dr. Morris created a thriving legacy that continues to equip many Christians to be able to defend the accuracy and authority of Scripture today. The new Henry Morris Study Bible and other resources that he developed remain essential sources of knowledge and understanding for believers.

▼▲
I'm the author/artist and I want to review The Beginning of the World: A Scientific Study of Genesis 1-11 - eBook.
Back
×
Back
×