We are OPEN and SHIPPING - click here for shipping estimates
PRE-SUMMER CYBER SALE EXTENDED thru 6/1 ~ Over 2,500 items up to 90% off
In the Beginning: Through Faith They Found Freedom, DVD 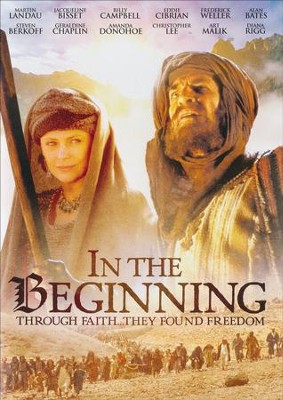 In the Beginning: Through Faith They Found Freedom, DVD

Through Faith... They Found Freedom. From Creation to the Commandments. Martin Landau stars as Abraham in this historical drama of a man, his people and their faith. Centered on one of the oldest and greatest spiritual texts of the world, In The Beginning is a powerfully rendered film, retelling some of the most enduring stories from the Old Testament - those of the Hebrew patriarch Abraham and his lineage. The saga begins with Creation and Abraham's call to find the Promised Land, then seamlessly weaves together the epic quest of a people through the lives of Isaac, Rebeccah, Esau and Jacob, the remarkable rise to power of Joseph, Moses and the burning bush, and the origin of Passover. As the story culminates with the Ten Commandments and Moses handing the staff of Abraham to Aaron, gazing upon the new land, there is sense that a new chapter in the life of the Jewish people is just beginning...with renewed hope, increased faith and promise for all generations.

Featuring an A-list cast, majestic shooting locations, and world-class visual effects, prepare for an epic with the dramatic sweep, power and passion found in the original stories. Approx. 2 hours, 53 minutes.

▼▲
I'm the author/artist and I want to review In the Beginning: Through Faith They Found Freedom, DVD.
Back
×
Back
×