We are OPEN and SHIPPING - click here for shipping estimates
PRE-SUMMER CYBER SALE EXTENDED thru 6/1 ~ Over 2,500 items up to 90% off
In the Beginning God: A Fresh Look at the Case for Original Monotheism - eBook
By: Winfried Corduan 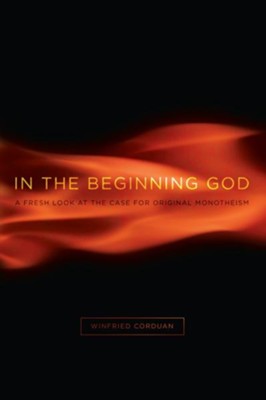 In the Beginning God: A Fresh Look at the Case for Original Monotheism - eBook

▼▲
Christians believe that religion began when God created human beings and revealed himself to them. But is there scholarly evidence for this belief?
In the nineteenth century academic world a stormy debate took shape over the origin of religion. Scholars explored the ancient languages of mythology and then considered evolutionary anthropology. A dominant view emerged that religion began with animism -- the reverent honoring of spirits -- and from there evolved into higher forms, from polytheism on to monotheism.

However, scholars Andrew Lang and Wilhem Schmidt contended there were cultures throughout the world -- pygmy people in Africa and Asia, certain Australian Aboriginal groups and Native American tribes -- that originated as monotheistic, acknowledging the existence of one supreme God who created the world and holds people accountable for living morally upright lives.

The debate wore on, and Schmidt, a member of the Catholic order and a priest, was accused (without evidence) of letting his faith interpret the facts. By the mid-twentieth century a silent consensus formed among scholars not to discuss the origin and evolution of religion any further. The discoveries of Lang and Schmidt have since been largely ignored.

However, the evidence on which these scholars based their conclusion of monotheism is still out there. In the Beginning God attempts to educate Christians about the debate on this topic, the facts that were accepted and those that were ignored, and the use to which Christians can put all of this material in making a case for the truth of Christianity.

▼▲
I'm the author/artist and I want to review In the Beginning God: A Fresh Look at the Case for Original Monotheism - eBook.
Back
×
Back
×