After the Beginning: Creation Revealed in Science and Scripture - eBook
By: Anthony Edridge 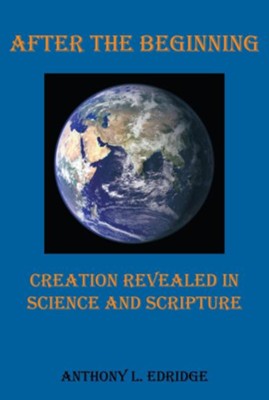 After the Beginning: Creation Revealed in Science and Scripture - eBook

A new and inspiring view of creation and the Flood

After the Beginning offers compelling insight about Gods purpose for an eternal loving relationship with mankind that was made in His image. This theme is revealed in Genesis with the creation of Adam and Eve, with the animals named by Adam, and with the animals that were saved on the ark. From creation through the Flood, Dr. Edridge concludes that the creatures described in Genesis had emotional capability, such as mammals and birds. Further consideration of species that should be included in the creation narrative leads to agreement between the biblical sequence of creation and the scientific chronology of the fossil record and the early stages of the Earths development.


Dr. Edridge examines different flood models to determine if they are consistent with biblical parameters and scientific scrutiny. Based on documented flood records and geological events, he proposes a new catastrophic Flood Model that meets both qualitative and quantitative requirements for the most likely flooded area, the cradle of civilization. This model is unique, providing a viable mechanism that caused the Flood to subside, but which agrees with the biblical description.

▼▲
I'm the author/artist and I want to review After the Beginning: Creation Revealed in Science and Scripture - eBook.
Back
×
Back
×