Skip to main content
SPRING CYBER EVENT STARTS NOW: And it's a really BIG deal! Up to 88% off through 5/24>
Beginning With Christ: Timeless Wisdom for Complicated Times
By: E. Stanley Jones, Anne Matthews-Younes
Stock No: WW858712 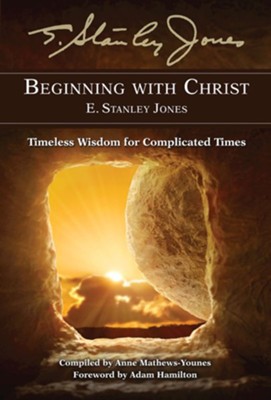 ▼▲
Adam Hamilton is senior pastor of The United Methodist Church of the Resurrection in Leawood, Kansas, one of the fastest growing, most highly visible churches in the country. The Church Report named Hamilton’s congregation the most influential mainline church in America, and he preached at the National Prayer Service as part of the presidential inauguration festivities in 2013. Hamilton is the best-selling and award-winning author of The Walk, Simon Peter, Creed, Half Truths, The Call, The Journey, The Way, 24 Hours That Changed the World, John, Revival, Not a Silent Night, Enough, When Christians Get It Wrong, and Seeing Gray in a World of Black and White, all published by Abingdon Press. Learn more about Adam Hamilton at AdamHamilton.com. Called "the world's greatest missionary evangelist" by Time magazine in 1938, E. Stanley Jones (1884-1973) spent 70 years presenting Jesus Christ as the universal Son of Man without the trappings of Western culture. His message had a life-changing impact on the millions of people who heard him speak or read his books.

▼▲
I'm the author/artist and I want to review Beginning With Christ: Timeless Wisdom for Complicated Times.
Back