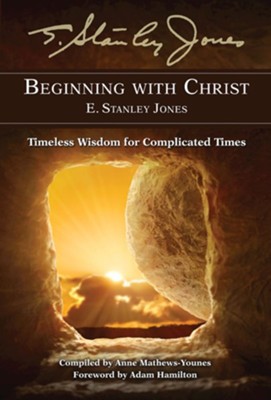 World-changers do not appear out of a vacuum. They follow the path lit by those who walk before them. E. Stanley Jones was a man who spent his life lighting the path. A missionary evangelist to India, Jones became friends with Mahatma Gandhi. Upon the assassination of Gandhi, Jones penned biography on his life. It is this biography that Dr. Martin Luther King, Jr credited with having inspired his non-violent resistance philosophy that would change the course of United States history, placing E. Stanley Jones as the link between these 20th century world-changers.

E. Stanley Jones lived in and wrote for a complicated time. The 20th century saw not only the death, destruction, and horror of wars but also saw good resisting evil and the dignity of people standing together. In these complicated times of our own, these words still resonate with today. Perhaps these words can once again light the path for the world-changers of the 21st century.

Abingdon Press is releasing a new compilation of E. Stanley Jones writings. Beginning with Christ: Timeless Wisdom for Complicated Times features selections from Jones's writings complied by his granddaughter Anne Mathews-Younes. With a foreword from Adam Hamilton, this book offers you the companionship of the man who shared the table of fellowship with Gandhi and inspired world-changers such as Martin Luther King, Jr. and Billy Graham. This collection is timely because these reflections are timeless.

Beginning with Christ offers you the opportunity to discover these writings for the first time or sit again at the feet of E. Stanley Jones.

▼▲
Called "the world's greatest missionary evangelist" by Time magazine in 1938, E. Stanley Jones (1884-1973) spent 70 years presenting Jesus Christ as the universal Son of Man without the trappings of Western culture. His message had a life-changing impact on the millions of people who heard him speak or read his books. Adam Hamilton is senior pastor of The United Methodist Church of the Resurrection in Leawood, Kansas, one of the fastest growing, most highly visible churches in the country. The Church Report named Hamilton’s congregation the most influential mainline church in America, and he preached at the National Prayer Service as part of the presidential inauguration festivities in 2013.
Hamilton is the best-selling and award-winning author of The Walk, Simon Peter, Creed, Half Truths, The Call, The Journey, The Way, 24 Hours That Changed the World, John, Revival, Not a Silent Night, Enough, When Christians Get It Wrong, and Seeing Gray in a World of Black and White, all published by Abingdon Press. Learn more about Adam Hamilton at AdamHamilton.com.

▼▲
I'm the author/artist and I want to review Beginning With Christ: Timeless Wisdom for Complicated Times - eBook.
Back
Back