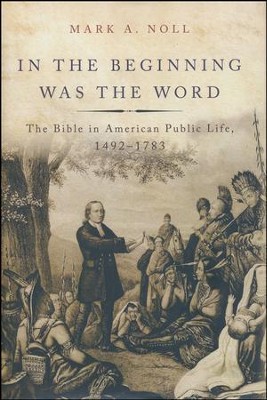 ▼▲
When the Puritans came to the New World, they had both an intense devotion to Scripture and a radical vision for society. Ever since, America has become a Bible-touting nation. Mark Noll, one of our foremost historians, astutely depicts how arguments from Scripture have fueled important breakthroughs as well as violent backlashes.

▼▲
In the beginning of American history, the Word was in Spanish, Latin, and native languages like Nahuatal. But while Spanish and Catholic Christianity reached the New World in 1492, it was only with settlements in the seventeenth century that English-language Bibles and Protestant Christendom arrived. The Puritans brought with them intense devotion to Scripture, as well as their ideal of Christendom -- a civilization characterized by a thorough intermingling of the Bible with everything else. That ideal began this country's journey from the Puritan's City on a Hill to the Bible-quoting country the U.S. is today. In the Beginning Was the Word shows how important the Bible remained, even as that Puritan ideal changed considerably through the early stages of American history.

One of the foremost scholars of American Christianity, Mark Noll brings a wealth of research and wisdom to In the Beginning Was the Word, providing a sweeping, engaging, and insightful survey of the relationship between the Bible and public issues from the beginning of European settlement. A seminal new work from a world-class scholar, this book offers a fresh account of the contested, sometimes ambiguous, but definite biblical roots of American history.

▼▲
Mark A. Noll is the Francis A. McAnaney Professor of History at the University of Notre Dame and author of numerous books, including America's God: From Jonathan Edwards to Abraham Lincoln (OUP 2002) and Protestantism: A Very Short Introduction (OUP 2011).

▼▲
A superb study of Early America's most widely read book by one of the nation's leading historians of religion. No one has ever before described and analyzed the role of the Bible in colonial America as thoroughly as Mark Noll has in this important book. In the Beginning Was the Word is a landmark work of history.
-Gordon S. Wood,
Professor of History Emeritus, Brown University

In the Beginning Was the Word documents the Bible's ubiquity in the nation's formative years. With massive research and lapidary prose, Noll shows how Scripture provided solace for individuals, authority for Protestants, and warrants for Christendom. Lest there be any doubt, the volume secures the author's rank as the dean of active American religious historians.
-Grant Wacker,
Gilbert T. Rowe Professor of Christian History, Duke Divinity School

Mark Noll has written a learned and wise treatment of the power of the Bible in early American history, sensitive to the ways Scripture was invoked on different sides of many disputes. Noll appropriately roots his account in the Old World background and restores the importance of Puritanism to the course of American History.
-Daniel Walker Howe,
Pulitzer-Prize-winning author of What Hath God Wrought: The Transformation of America, 1815-1848

▼▲
I'm the author/artist and I want to review In the Beginning Was the Word: The Bible in American Public Life, 1492-1783.
Back
Back