Skip to main content
The Beginning of Baptist Ecclesiology: The Foundational Contributions of Thomas Helwys - eBook
By: Marvin Jones
Stock No: WW110418EB 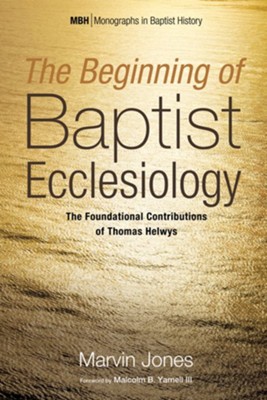 The Beginning of Baptist Ecclesiology: The Foundational Contributions of Thomas Helwys - eBook

▼▲
The basic question, "Where did Baptists come from and why?" has two camps that offer differing explanations: (1) the English Separatist camp produced the ministries of foundational Baptists, John Smyth and Thomas Helwys, thus takes credit for Baptist origins, and (2) the Anabaptist movement is the alternative camp, understanding either a direct connection via lineage back to the infamous Swiss Brethren or an indirect connection via Anabaptist teachings. Anabaptist ecclesiology is very much akin, if not in some ways identical, to modern Baptist ecclesiology. In fact, the Baptist church, led by John Smyth and successively by Thomas Helwys, resembled both English Separatist and the Anabaptist ecclesiology with notable differences between both entities. When The Mystery of Iniquity is properly understood, as Helwys intended, the reader will grasp the logical reasons that the Baptist church in 1607 was akin to both the English Separatist and the Anabaptist and yet differed from both. In The Beginning of Baptist Ecclesiology, Marvin Jones give a fresh voice to Thomas Helwys's opinion that a Baptist church is a viable New Testament church, and provides further relevant material rationale for the conversation concerning Baptist origins.

▼▲
Marvin Jones is the Chair of the Christian Studies Division at Louisiana College in Pineville, LA. He is also the author of Basil of Caesarea (2014).

▼▲
I'm the author/artist and I want to review The Beginning of Baptist Ecclesiology: The Foundational Contributions of Thomas Helwys - eBook.
Back
Back