Skip to main content
Begin with a Question: Poems
By: Marjorie Maddox
Stock No: WW605374 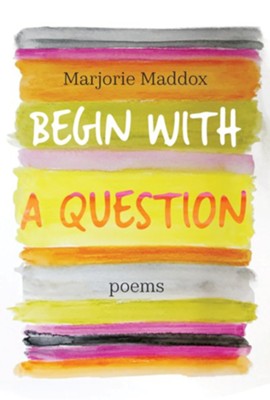 Begin with a Question: Poems

▼▲
Begin with a Question explores how the life of faith is a continuous voyage, launched anew each bright day of the spirit or dark night of the soul. This is a book of contemplation and motion, a journey—often in stops and starts—toward the Divine, a pilgrimage paved with prayer, praise, pause, penitence, and (of course) questions. Urgent and universal, joyful or joyless, tinged with doubt or rinsed with hope, here are honest queries that probe, lift, and lead to discovery. Begin with a Question keeps us moving, seeking, reaching, lifting us out of ourselves to something beyond. Using a variety of fixed forms and free verse, the poet examines our relationship to the one who asks, "Who do you say that I am?" A book for seekers, doubters, and believers alike, these poems bring us face to face with anguish, anger, awe, and adoration. They give us permission not to demand answers, but to follow the questions that lead to the Alpha and Omega, to the I AM that keeps us spiraling along this twisting path toward God.

Begin with a Question is published under Paraclete Press's Iron Pen imprint. In the book of Job, a suffering man pours out his anguish to his Maker. From the depths of his pain, he reveals a trust in God's goodness that is stronger than his despair, giving humanity some of the most beautiful and poetic verses of all time. Paraclete's Iron Pen imprint is inspired by this spirit of unvarnished honesty and tenacious hope.

▼▲
Professor of English and Creative Writing at Lock Haven University, Marjorie Maddox has published 13 collections of poetry, a short story collection, four children’s and YA books, and 650+ stories, essays, and poems in journals and anthologies.

▼▲
"One of Marjorie Maddox’s gifts is her ability to knit together unlikely pairings into original visions: Eve smells the salt wafting off Lot’s calcified wife, Apple’s Siri becomes a gnostic saint, and St. Victor of Marseilles stars in a spinoff of The Walking Dead. Her poems question our default ways of organizing and categorizing: a backyard haircut becomes an exploration of many of the dichotomies that shape our thinking—inner vs. outer, before vs. after, childhood vs. adulthood. Her imaginative leaps work toward discernment, facing into the world’s strange bewilderments to find connections across time and place. Begin with a Question faces the ways that the notes of human imagination are often 'off-key, shrill, and wobbly' and builds from them a chorus large enough to hold the living and the dead." —Mary Szybist, author of Incarnadine

"To enter the universe of Maddox's new poetry Begin with a Question is to be  invited to participate in an amazingly  powerful and intricate work of art. Intensely personal, inventive, often ironic and complex but accessible upon careful reading, this skilled poetry opens our windows to wonder at a universe penetrated by divine power and grace." —Luci Shaw, author of Angels Everywhere

"Marjorie Maddox’s new collection Begin with a Question begins with a question, 'But why?' The poet then sets about providing an abundance of possible answers to the most provocative of all the interrogatives, taking readers on a careening journey through human history to discover the sources and salves for our discontents—from Eve cradling her murdered son in the ruins of Eden to Mary holding hers against her own 'crucified heart' on Golgotha; from the impending death of the poet’s suffering mother in a distant assisted living facility to the young mother who nurses her baby in the small hours of the morning accompanied by the hymn-playing Church organist on the other side of the duplex wall; from 'the hard Epiphany' of January 6th, 2021 when a hate-filled mob overruns the seat of government to the 'random acts' of kindness whereby a suicide is saved, an accident avoided, a toll paid. These poems bear faithful witness to suffering on both the small and the grand scale and bravely offer the antidote, asserting over and over the radical fact that when all seems lost we must begin again. In the face of sorrow, the death of loved ones, and the acedia of everyday suburban life, Maddox’s book posits nothing short of a theodicy of love." —Angela Alaimo O’Donnell, author of Andalusian Hours: Poems from the Porch of Flannery O’Connor and Love in the Time of Coronavirus: A Pandemic Pilgrimage


It has been many years since I first encountered Marjorie Maddox’s work, through her early deeply meaningful collection titled Perpendicular As I. Since then, I have sought out her books, reviewed them when I could, savored them in private, and conversed about them with fellow poets and readers of poetry. So, I should not be amazed by the resonance in me as well as the objective expressiveness, that is to say, relevance, of Begin with a Question.

Ah, how to describe this persuasive and substantive collection&hellip; Let’s see. To begin with, I love the line, "My heart takes off its sandals of maybe", which appears early in the book, advising us that, for every question, there is not only a this-or-that response, but also the resounding answer, from the poet of faith, that can only be summed up by "yes": yes to embracing life in all its complexity, yes to its sorrows and joys, ironies and paradoxes, earthiness and heavenliness, most importantly, yes to a God-soaked, God-imbued, God-redeemed life. Maddox has a way of bringing opposites together without forcing meaning, yet finding meaning—even in, or I should say especially in, the most mundane actions: a crochet chain, a backyard haircut, "suburban dirt and city gardens"....

There are also, more often than not, deeper territories to explore: painful, yet redeeming territories: a father’s heart transplant, a mother who knows she’s dying, who says to her daughter, "I am slowly fading away", a poet-friend lost to cancer, their final visits. Through these and multiple other instances, the reader is given the clear impression that something very important, something vital, is happening all the time in the poet’s life and in our lives, in the earth around us, in nature, in society, in time—and in eternity. It is all consequential, whether it is occurring below the surface or before our eyes, as we sense in these following lines. "Today, / a woman, not unlike me, / offered tea; the teen / the car in front of me / took on my toll; / the not-random angel / on the highway shifted / slightly to the right / a patch of ice / I did not see— / or was that me / become me / in them, finally folding / my fingers just so, the water / brimming, cool and clear / just as a stranger walks by?"

Perhaps in our do-this, do-that schedules, we may not take the time to pause and ask the questions Maddox asks—at least not consciously. But, here she is, the poet, asking them for us, nudging us to contemplate the answers, which always exist—hidden, tantalizing, frequently unknown, but no less real. The poems in Begin with a Question are as honest and open as the day, and as intriguing and haunting as the night. The people who inhabit the poems speak from their own places, yet enter into our space with as much ease as the fears and expectations that abide in us. Interestingly, we are never left simply with disembodied questions, because Maddox has a particularly heightened gift: that of connecting intimately with the reader. You hear her voice in the poem; you sense her insistence, the joy when there is joy, the gravity when there is gravity—and often both. This ability to connect is almost uncanny; the hospitality of Maddox's poems translates into her asking the reader, generously, to return for a second and a third perusal. And you will find it difficult to resist.

At the book’s closing, Maddox leaves us with the assurance that the questions are worth posing because the answer, no less impactful when it is yet to be discerned, involves ultimately a communion of saints, a communion of "mercy in perpetuity", where we, all of us, sing "off-key, shrill, and wobbly", but oh—by God, in God—ever so human.

—Sofia M. Starnes, Virginia Poet Laureate, Emerita, author of A Consequence of Moonlight and other works

▼▲
I'm the author/artist and I want to review Begin with a Question: Poems.
Back