Skip to main content
SPRING CYBER EVENT STARTS NOW: And it's a really BIG deal! Up to 88% off through 5/24>
Befriending the Beloved Disciple: A Jewish Reading of the Gospel of John
By: Adele Reinhartz
Stock No: WW14463 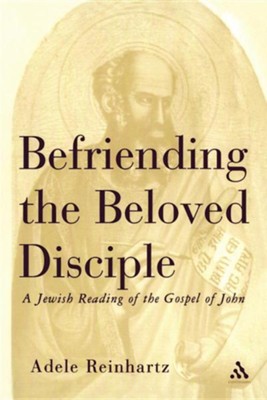 Befriending the Beloved Disciple: A Jewish Reading of the Gospel of John

▼▲
From the Prologue: The subtitle of this book promises you, gentle reader, a Jewish reading of the Gospel of John. I confess at the outset that this title is misleading. First, this book offers not a Jewish reading but several. Second, these readings are not normative or representative of Jewish approaches to the Gospel of John; after all, most Jews do not read the Fourth Gospel. Nor can I assure you that my readings would be shared by all, or any, of the other Jews who have ventured into Johannine territory. Thus a more accurate, if overly cumbersome, subtitle might have been: "Several Readings of the Gospel of John Attempted by One Jewish Reader."

▼▲
Adele Reinhartz has been studying and teaching the Gospel of John for many years. Earlier, she chose to ignore the love/hate relationship that the book provokes in her, a Jew, and took refuge in an "objective" historical-critical approach. At this stage her relationship to the Gospel was not so much a friendship as a business relationship. No longer willing to ignore the negative portrayal of Jews and Judaism in the text, nor the insight that her own Jewish identity inevitably does play a role in her work as an exegete, Reinhartz here explores the Fourth Gospel through the approach known as "ethical criticism," which is based on the metaphorical notion of the book as "friend"--not "an easy, unquestioning companionship," but the kind of honest relationship in which ethical considerations are addressed, not avoided. In a book as multilayered as the Gospel itself, Reinhartz engages in 4 different "readings" of the Fourth Gospel: compliant, resistant, sympathetic, and engaged. Each approach views the Beloved Disciple differently: as mentor, opponent, colleague, and as "other." In the course of each of these readings, she elucidates the three narrative levels that interpenetrate the Gospel: the historical, the cosmological, and the ecclesiological. In the latter, Reinhartz deals at length with the so-called expulsion theory, the dominant scholarly notion that the Johannine community, which included believers of Jewish, Gentile, and Samaritan origins, engaged in a prolonged and violent controversy with the local Jewish community, culminating in a "traumatic expulsion from the synagogue."

▼▲
I'm the author/artist and I want to review Befriending the Beloved Disciple: A Jewish Reading of the Gospel of John.
Back