Skip to main content
Come Before Winter: Profiles of Some of Paul's Friends...and some who were not.
By: Cyril J. Barber
Stock No: WW081792 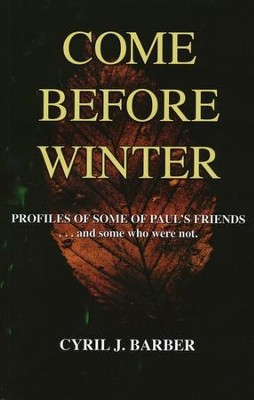 Come Before Winter: Profiles of Some of Paul's Friends...and some who were not.

▼▲
Contemporary writers who have chosen to comment on the lives of people mentioned in the Bible invariably fall into one of two groups: the first provide us with pen portraits that paint the individual(s) without a single failing; the second appear to be so intent on portraying the weakness(es) of those whom they write that there is little or nothing for us to emulate.

This work attempts to be different. By paying attention to the literary nuances in the original text, as well as the history, geography and social milieu of the different people, an attempt has been made to provide an accurate description of each person and his/her work.

Next to our Lord Jesus Christ there is no one in the New Testament who can be compared with the Apostle Paul. Around the life of the Lord Jesus there clustered, on the one hand, His disciples, and on the other, His malignant adversaries. Similarly, around the life of Paul we read of his loyal friends as well as his relentless enemies. Paul's friends and foes, who are mentioned in the book of Acts, are treated in this book.

When Paul was nearing the end of his earthly pilgrimage, he was languishing in the Mamertine Prison in Rome. It was then and still is a cold, comfortless dungeon. Paul wrote to Timothy and urged him to come to him before winter and bring with him certain of his possessions, including a cloak, that he had left in Troas.

Paul, of course, had many friends, but Timothy was closest to Troas. Who were his friends, and what did they do? They are representatives of the multitude of people who, often unhonored and unsung, are worthy of our attention, for in many respects they are like us. It is the hope of the author that reading about these men and women will encourage a fresh study of the book of Acts.

▼▲
I'm the author/artist and I want to review Come Before Winter: Profiles of Some of Paul's Friends...and some who were not..
Back
Back