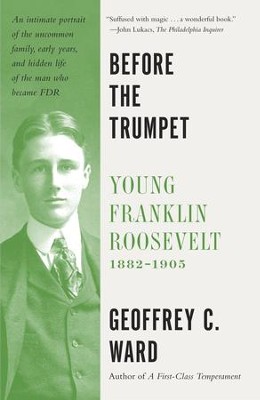 ▼▲
Before Pearl Harbor, before polio and his entry into politics, FDR was a handsome, pampered, but strong-willed youth, the center of a rarefied world.  In Before the Trumpet, the award-winning historian Geoffrey C. Ward transports the reader to that world—Hyde Park on the Hudson and Campobello Island, Groton and Harvard and the Continent—to recreate as never before the formative years of the man who would become the 20th century’s greatest president. Here, drawn from thousands of original documents (many never previously published), is a richly-detailed, intimate biography, its central figure surrounded by a colorful cast that includes an opium smuggler and a pious headmaster; Franklin's distant cousin, Theodore and his remarkable mother, Sara; and the still-more remarkable young woman he wooed and won, his cousin Eleanor. This is a tale that would grip the reader even if its central character had not grown up to be FDR.

▼▲
Geoffrey C. Ward is the coauthor of The Civil War (with Ken Burns and Ric Burns), and the author of A First-Class Temperament: The Emergence of Franklin Roosevelt, which won the 1989 National Book Critics Circle Award for biography and the 1990 Francis Parkman Prize.

"The freshest and most penetrating study of the young FDR." —Chicago Sunday Tribune

"The texture is  . . . richer, the detail more finely tuned than in any other portrait." —The New York Times Book Review

"Quite the best thing I have ever read about FDR and Eleanor Roosevelt.  The wonder is that [it] unearths so much new and revealing material—letters, conversations, insights . . . appealing and inspiring."—Atlanta Constitution

▼▲
I'm the author/artist and I want to review Before the Trumpet: Young Franklin Roosevelt, 1882-1905 - eBook.
Back
Back