Skip to main content
End the IRS Before It Ends Us: How to Restore a Low Tax, High Growth, Wealthy America - eBook
By: Grover Norquist
Stock No: WW68208EB 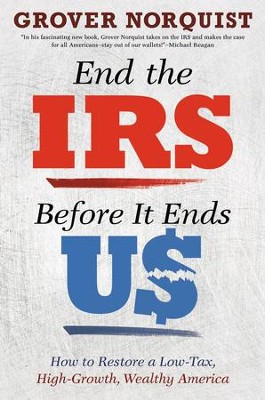 End the IRS Before It Ends Us: How to Restore a Low Tax, High Growth, Wealthy America - eBook

▼▲
As the recent scandal shows, the IRS is big, bad, and out of control. Grover Norquist analyzes the problems within the agency and presents solutions to rein them in.

The driving force behind the American Revolution was our forefathers' refusal to accept unfair taxation. Citizens rose up, won a war against impossible odds, and established the most unique government on the face of the earth, with taxes set at about 2 percent.
How much has changed since 1776?
The strength of Americans resolve is still unrivaled, and Grover Norquist, founder and president of Americans for Tax Reform, knows that once liberty-loving Americans learn the truth behind the oppressive and prosperity-stifling taxes we face today, they'll rise up again.

Urging his fellow citizens to join him, Norquist tells a powerful and urgent story that will convince you we must act now to End This Before It Ends Us.

▼▲
Grover Norquist is president of Americans for Tax Reform and the American Society of Competitiveness. He serves on the board of directors of the NRA, the American Conservative Union, the Parental Rights Organization, and the Center for the National Interest. Norquist is a contributing editor to the American Spectator Magazine and has authored three books: Rock the House, Leave Us Alone, and Debacle, with co-author John Lott.
Learn more: ATR.org

▼▲
I'm the author/artist and I want to review End the IRS Before It Ends Us: How to Restore a Low Tax, High Growth, Wealthy America - eBook.
Back
Back