Skip to main content
Before You Do: Making Great Decisions That You Won't Regret - eBook
By: T.D. Jakes
Stock No: WW8977EB 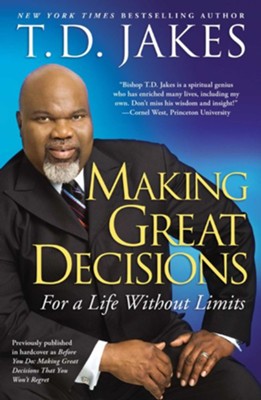 Before You Do: Making Great Decisions That You Won't Regret - eBook

▼▲
Making Great Decisions is a collection of Scripture and quotes that help reinforce the spiritual message and teachings discussed in Before You Do. These daily reflections will remind you that applying Christian principles to important relationship decisions will ensure choices that you'll be proud of for the rest of your life. Paperback.

▼▲
T.D. Jakes offers readers of the New York Times bestseller Before You Do, now retitled Making Great Decisions: For a Life Without Limits, a collection of Scripture and quotes that provides the spiritual underpinnings of his message about applying Christian principles to making important choices that you'll be proud of for the rest of your life. Before You Do, the narrative book, uses wisdom collected from more than thirty years of Jakes's experience counseling and working with high-profile and everyday people through his ministry and numerous appearances on national television and radio.

Relationship decisions come down to five crucial components, according to Bishop Jakes:
Research: gathering information and collecting data
Roadwork: removing obstacles and clearing the path
Rewards: listing choices and imagining their consequences
Revelation: narrowing your options and making your selection
Rearview: looking back and adjusting as necessary to stay on course

Making Great Decisions Reflections collects the words that ground Before You Do in biblical teachings, making this book an essential keepsake, to carry with you in moments when inspiration and encouragement are needed.

▼▲
T.D. Jakes is the CEO of TDJ Enterprises, LLP; founder and senior pastor of The Potter’s House of Dallas, Inc.; and the New York Times bestselling author of Making Great Decisions (previously titled Before You Do), Reposition Yourself: Living Life Without Limits, and Let It Go: Forgive So You Can Be Forgiven, a New York Times, USA TODAY, and Publishers Weekly bestseller. He has won and been nominated for numerous awards, including Essence magazine’s President’s Award in 2007 for Reposition Yourself, a Grammy in 2004, and NAACP Image awards. He has been the host of national radio and television broadcasts, is the star of BET’s Mind, Body and Soul, and is regularly featured on the highly rated Dr. Phil Show and Oprah’s Lifeclass. He lives in Dallas with his wife and five children. Visit T.D. Jakes online at TDJakes.com.

▼▲
I'm the author/artist and I want to review Before You Do: Making Great Decisions That You Won't Regret - eBook.
Back
Back