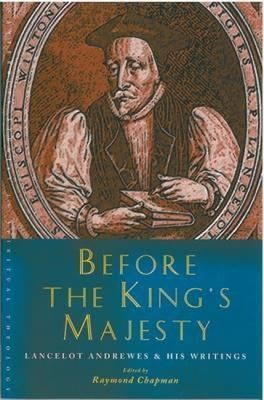 Before the King's Majesty: Lancelot Andrewes and His Writings

▼▲
Lancelot Andrewes (1555-1626) was a towering figure in the formative years of the Church of England. Averse to the puritanical spirit of the age, he helped to create a distinctive Anglican theology, moderate in outlook and catholic in tone. He believed that theology should be built on sound learning, he held a high doctrine of the Eucharist and he emphasised dignity and order in worship. His influence defines Anglicanism to this day.A devout scholar and gifted linguist, he served as Dean of Westminster and under James I became Bishop of Chichester, then Ely and finally Winchester. In 1604 he was appointed as one of the translators of the Authorized Version and became responsible for most of the Old Testament. It was as a preacher that he achieved the greatest fame and he was a favourite of Elizabeth I, James I and Charles I. His spiritual classic, "The Private Devotions of Lancelot Andrewes" was for personal prayer what the "Book of Common Prayer" was for the worship of the Church. Here is a wide selection from his writings and a general introduction.

▼▲
Raymond was the author of many widely-used books of prayer and devotion including Leading Intercessions, Hear Our Prayer, and A Pastoral Prayer Book. He was a Vice-Chairman of the Prayer Book Society, Emeritus Professor of English Literature in the University of London, and a greatly loved priest in the diocese of Southwark. He died in 2013.

▼▲
I'm the author/artist and I want to review Before the King's Majesty: Lancelot Andrewes and His Writings.
Back