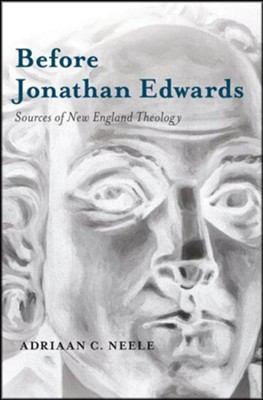 ▼▲
In Before Jonathan Edwards, Adriaan Neele seeks to balance the recent academic attention to the developments of intellectual history after Jonathan Edwards. Neele presents the first comprehensive study of Edwards's use of Reformed orthodox and Protestant scholastic primary sources in the
context of the challenges of orthodoxy in his day. Despite the breadth of Edwards scholarship, his use of primary sources has been little analyzed. Yet, as Neele proves, Edwards's thinking on the importance of these primary sources has significant implications not only for the status of the New
England theology of pre-Revolutionary America but also for our understanding of Edwards today.

This volume locates Edwards's ideas in the context of the theological and philosophical currents of his day, as well as in the pre-modern exchange of books and information during the colonial period. The pre-Revolutionary status of theology and philosophy in the wake of the Enlightenment had many of
the same problems we see in our theological education today with respect to the use and appropriation of classical theology in a 21st-century context. Ideas about the necessity of classical primary sources of Christianity in sustaining our theological education are once again becoming important, and
Edwards offers many relevant insights. Edwards was not unique in his deployment of these primary sources; many New England pastors, including Cotton Mather (1663-1728), preached and wrote about the necessity of orthodox theology. Edwards's distinction came in his thinking about the issues set forth
in these sources at a transitional moment in the history of Christian thought.

▼▲
Adriaan C. Neele is a Research Scholar, Jonathan Edwards Center at Yale University and Director of the Doctoral Program and Professor of Historical Theology at Puritan Reformed Theological Seminary. He is the author of The Art of Living to God and Petrus van Mastrich: Reformed Orthodoxy and Piety.

▼▲
"Thanks to Neele's splendid study, these questionsmay be pursued further by students of Edwards, but they had better know their Latin." -- DAVID W. KLING, The Journal of Religion
"Few works appear whose influence has the potential to change an entire field of research. Adriaan Neele's, Before Jonathan Edwards: Source of New England Theology, is certainly one of them." -- S. Mark Hamilton, International Journal of Systematic Theology
"Adriaan Neele's monograph places Jonathan Edwards within the broader intellectual context of high and late Reformed orthodoxy in order to highlight the discontinuities and continuities existing between them ... Before Jonathan Edwards fills a large lacuna in the secondary literature. In terms of
Edwards's relation to Reformed scholastic tradition, this work was sorely needed and should be welcomed wholeheartedly by scholars thinking afresh about the link between Reformed theology on the European continent and in New England." -- Phillip Hussey, Journal of Ecclesiastical History
"Neele's mastery of Latin, familiarity with Reformed orthodox and Protestant scholastics, and expertise on Edwards's New England contemporaries is a major asset for this study. Each of Neele's assertions is meticulously supported with corroborating evidence. This study rounds out the modern
depiction of Jonathan Edwards and displays how he is a complex historical figure worthy of continuous engagement and study." -- Joseph T. Cochran , Fides et Historia
"Before Jonathan Edwards is essential reading for students of Edwards and those who are interested in post-Reformed Reformed theology, and it will be a key source for any looking to engage the source material of Edwards's own pastoral and academic endeavors." -- Kyle Strobel, Talbot School of
Theology, Biola University, themelios
"In tracing of the roots for Edwards's thought, this volume fills a lacuna in studies of religious thought in Colonial New England." -- S.C. Pearson, CHOICE
"Neele's encyclopedic treatment of one of the most important sources of Jonathan Edwards's New England Theology is must reading for specialists in early modern Protestant thought. Building upon his earlier work on the Dutchman Peter van Mastricht, Neele has laid out and summarized the Latinate
Reformed bibliography in Edwards's world, demonstrated continuities and discontinuities between Edwards and the work of his Reformed antecedents, and thus underscored Edwards's place in early modern Western Christian intellectual history. This will be an essential handbook for scholars like me for
years to come."--Douglas A. Sweeney, author of Edwards the Exegete
"Adriaan Neele's book is a real eye-opener. It reveals Edwards's relationship with New England Theology, Puritanism, the Dutch 'Nadere Reformatie', German Pietism, spirituality of the Middle Ages, and High and Late Orthodoxy. At the same time, it shows his interaction with modern sciences,
philosophical structures, and cultural developments. Neele's awareness of Edwards's amazingly complex theology and spirituality will undoubtedly lead to new impulses for research in Edwards and the understanding of his catholic character."--Willem van Vlastuin, Chair of Theology and Spirituality of
Reformed Protestantism, Free University of Amsterdam
"Restlessness is endemic to our age, but in Edwards's preaching and pastoring we find deep and satisfying theological roots. In this book, Neele helps us uncover the ways in which the sage from Northampton found spiritual nourishment to pass on to others, highlighting his trans-Atlantic context,
favourite authors, and integrative spirituality. Though at first this seventeenth-century world may feel strange, rest assured that it will be balm for the soul."--Rhys Bezzant, author of Jonathan Edwards and the Church

▼▲
I'm the author/artist and I want to review Before Jonathan Edwards: Sources of New England Theology.
Back