Skip to main content
SPRING CYBER EVENT STARTS NOW: And it's a really BIG deal! Up to 88% off through 5/24>
We Died Before We Came Here: A True Story of Sacrifice and Hope
By: Emily Foreman
Stock No: WW464517 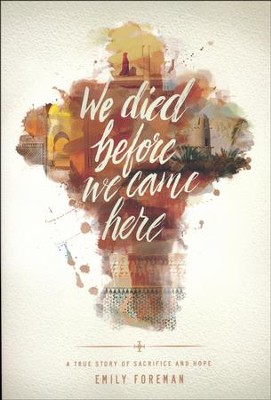 We Died Before We Came Here: A True Story of Sacrifice and Hope

Early one morning, just down the street from the local mosque, gunshots shattered the silence. A young American lay in a pool of blood, murdered by al-Queda extremists.

When God called Emily and Stephen Foreman to bring the gospel to a Muslim nation where Christianity was illegal, they knew they were being called to a life of sacrifice. "We died before we came here" was their common refrain.

Emily, left with four children and an undying calling to reach the Muslim world, recounts in this memoir the powerful story of God's work through a life poured out for Christ. Stephen Foreman's death was not the beginning, nor was it the end. And he did not die in vain. This promise echoes through the book's pages and far beyond, in the hearts and lives of countless individuals touched by a man who lived his life as though it wasn't his own.

Please note: Because of security issues and the need to protect other workers and local believers in the country, this book employs pseudonyms for all major characters, including the authors.

▼▲
If not you, who? If not now, when? This was the challenge answered by Stephen Foreman and his wife, Emily, when they traded in their American white picket fence for a giant, dusty sandbox as missionaries in the deserts of North Africa. Stephen had given Emily a well-read copy of Foxe’s Book of Martyrs on their first date, a telling foreshadowing of the ultimate cost he would pay when, at 39, he was shot and killed by al-Qaeda operatives. His life and death planted a seed of boldness and inspiration in the hearts of local believers. This seed would grow and multiply efforts to help reach the very goal that Stephen was willing to give his life for—glorifying God and seeing his Kingdom established among the nations.

In this memoir, Emily, left with four kids and an undying calling to reach the Muslim world, recounts their heartrending yet uplifting story of sacrifice and love for a people held captive by the ultimate Enemy. Stephen did not die in vain. This promise echoes through the book’s pages and far beyond, in the minds and lives of countless individuals touched by a man who daily put his life in the hands of God.

Because of security issues and the need to protect other workers and local believers in the country, the book employs pseudonyms for all major characters, including the authors.

▼▲
I'm the author/artist and I want to review We Died Before We Came Here: A True Story of Sacrifice and Hope.
Back
Back