Skip to main content
Before Galileo: The Birth of Modern Science in Medieval Europa
By: John Freely
Stock No: WW306990 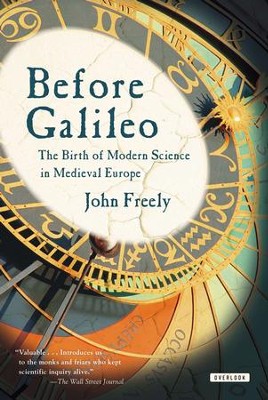 Before Galileo: The Birth of Modern Science in Medieval Europa

▼▲
"Modern science" is often cast as beginning with Galileo. But what about the men who came before him, whose ideas he built upon and recast?

Before Galileo looks at the contributions of Saint Bede, Oxford scholar Robert Grossteste, physician Hunayan ibn-Ishaq, astronomy professor Erasmus Reinhold, and others who laid the foundation for what we now know as "science." This engaging work is a perfect intersection between history and science, and provides historical context for later developments. High School-Adult. 348 pages, indexed, hardcover with dust jacket.

▼▲
Histories of modern science often begin with the heroic battle between Galileo and the Catholic Church, which ignited the Scientific Revolution and gave way to the world-changing discoveries of Isaac Newton. Virtually nothing is said about the European scholars who came before. In reality, more than a millennium before the Renaissance, a succession of scholars paved the way for the exciting discoveries usually credited to Galileo, Newton, Copernicus, and others. In Before Galileo, physicist and historian John Freely examines the pioneering research of the first European scientists, many of them monks whose influence ranged far beyond the walls of the monasteries where they studied and wrote.

▼▲
John Freely was born in Brooklyn, New York in 1926. He teaches physics at Bosphorous University in Istanbul. He has written more than forty books, including The Lost Messiah, The Grand Turk, and Aladdin's Lamp.

▼▲
Praise for Before Galileo:

"Valuable . . . introduces us to the monks and friars who kept scientific inquiry alive." --The Wall Street Journal

"Physicist John Freely traces this 'tenuous Ariadne's thread' of learning that unspooled from Egypt through Byzantium and the Islamic world." --Nature

"Freely packs a lot of good stuff into 315 pages and makes the case that modern science in Europe benefited from a thousand years of work leading up to it.  We just have to look past the public relations efforts to find it." --Science 2.0

▼▲
I'm the author/artist and I want to review Before Galileo: The Birth of Modern Science in Medieval Europa.
Back
Back