Before You Quit: Everyday Endurance, Moral Courage and the Quest for Purpose
By: Doug Gehman 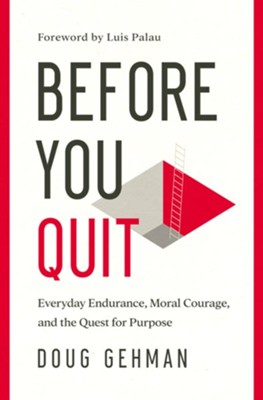 Before You Quit: Everyday Endurance, Moral Courage and the Quest for Purpose

How Non-Quitters Changed the World

You’re exhausted. As you see your time and joy being spent on something that isn’t going the way you planned&hellip; some days you wonder if it’d just be better to quit.

Whether it’s now or later, we’re all faced with a choice between good and easy, between continuing on through difficulty or giving up. When that day comes, what will you choose?

Doug Gehman observed firsthand how God used one man’s relentless perseverance to change a country, and it changed him. In this book he shares dozens of stories of ordinary people who did extraordinary things for the kingdom of God because they simply kept going—through pain, discouragement, loss, and failure. He’ll teach you how to cultivate a gritty perseverance that counts the cost and follows through. Become a person of courage and commitment. It’ll cost you dearly, but it will change your life forever.

▼▲
DOUGLAS GEHMAN attended Goshen College and Fuller Theological Seminary, and completed Master's and Doctorate degrees in Missions at Liberty Christian University in Pensacola, FL. Since 1994, Doug has served with Globe International, a mission-sending agency based in Pensacola, FL. He became the Director in 2001 and the President in 2004. Doug loves coaching and mentoring emerging leaders, helping them discover their giftings and life direction. Doug and Beth have ministered in neary sixty nations. They have four married children and eleven grandchildren. Doug is the author of three books. The most recent is their family's story, called White Picket Fences. He loves writing, surfing, cycling, walking, and spending time with his family.

▼▲
I'm the author/artist and I want to review Before You Quit: Everyday Endurance, Moral Courage and the Quest for Purpose.
Back
×