Skip to main content
SPRING CYBER EVENT STARTS NOW: And it's a really BIG deal! Up to 88% off through 5/24>
Death Before the Fall: Biblical Literalism and the Problem of Animal Suffering - eBook
By: Ronald E. Osborn
Stock No: WW50578EB 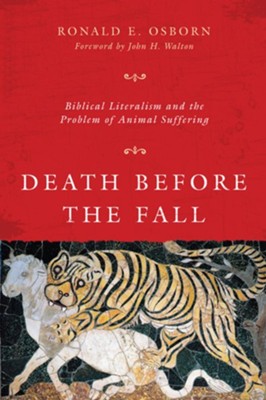 Death Before the Fall: Biblical Literalism and the Problem of Animal Suffering - eBook

▼▲
ECPA Top Shelf Book Cover Award Did animals have predatory natures before the fall? Did God punish innocent animals with a curse because of human sin? Is it possible for theistic evolution to be compatible with the Bible, even though animal death before the fall would contradict the teaching that death began after the first sin? In this eloquent and provocative "open letter" to evangelicals, Ronald Osborn wrestles with these pointed questions and with the problem of biblical literalism and animal suffering within an evolutionary understanding of the world. Considering the topic of animal suffering and predation as a theodicy dilemma, Osborn offers an open-minded exploration of the subject, specifically coming against the fundamentalist and literalist view of the book of Genesis and the creation account. He challenges one-dimensional reading of Scripture and shines a sobering light on the evangelical dogma responsible for advancing viewpoints long ago dismantled by science. Always acknowledging the traditionalist viewpoint, Osborn demonstrates with a wealth of exegetical and theological insight how orthodox Christianity can embrace evolutionary concepts without contradiction. Osborn forces us to ask hard questions, not only of the Bible and church tradition, but also and especially of ourselves.

▼▲
Ronald E. Osborn (PhD, University of Southern California) is an Andrew W. Mellon teaching fellow in the Peace and Justice Studies program at Wellesley College. He is the author of Anarchy and Apocalypse: Essays on Faith, Violence, and Theodicy. John H. Walton (PhD, Hebrew Union College) is professor of Old Testament at Wheaton College and Graduate School. Previously he was professor of Old Testament at Moody Bible Institute in Chicago for twenty years. Some of Walton's books include The Lost World of Adam and Eve, The Lost World of Scripture, The Lost World of Genesis One, Ancient Near Eastern Thought and the Old Testament, The Essential Bible Companion, The NIV Application Commentary: Genesis and The IVP Bible Background Commentary: Old Testament (with Victor Matthews and Mark Chavalas). Walton's ministry experience includes church classes for all age groups, high school Bible studies and adult Sunday school classes, as well as serving as a teacher for "The Bible in 90 Days." John and his wife, Kim, live in Wheaton, Illinois, and have three adult children.

▼▲
As religious communities struggle to make sense of their faith traditions after Darwin, they rely on thoughtful and sensitive seers to lead them beyond the shallows of literalism to a deeper encounter with new scientific discoveries. Ronald Osborn's sophisticated reflections on literalism and animal suffering will be helpful to Christians of all denominations who are troubled by the wild ways of evolution.
-John F. Haught,
Woodstock Theological Center, Georgetown University

Ronald Osborn, with an agile mind and a well-informed intellect, throws down the gauntlet concerning misreading of the Genesis narratives. Taking aim at literalists and fundamentalists, he probes the ways in which one-dimensional reading distorts. Along the way he takes up issues of theodicy as they pertain to all of creation and to the animal realm in particular. Readers can expect to be jolted, surprised and challenged by this forthright statement.
-Walter Brueggemann,
Columbia Theological Seminary

Ronald Osborn draws together a variety of sources and addresses key issues in this rich project. His analysis of literalism and biblical interpretation is sorely needed in many circles today. And his insights on animal suffering should prove helpful as believers wrestle with the central issues of God's grace in a world of both pleasure and pain, holiness and harrowing abuse.
-Thomas Jay Oord,
Northwest Nazarene University, Nampa, Idaho

A beautifully written book! Ron Osborn writes not with spite and ire but with wisdom and generosity of spirit. Where literalism once ruled as the only way to honor Scripture, here the deeper dimensions of God's compassion and Sabbath rest come to light. This is the first book I've read on the evolution-and-creation debate that brought tears to my eyes.
-Philip Clayton,
Claremont School of Theology

Many Christians believe that theistic evolution is incompatible with the Bible because the former requires animal death before the Fall, while the Bible teaches that death began only with the first sin (Romans 5:12). Osborn successfully addresses this issue with a wealth of exegetical and theological insight. He further exposes the intellectual weakness and devastating spiritual consequences of the kind of literalism that leads to 'creation science.' This book is a must-read for all Christians (but particularly for pastors and other Christian leaders), especially for those who insist on a rigid literalistic approach to Genesis 1-2. It will also be an eye-opening introduction to religious ways of thinking about evolution for those nonbelievers who have assumed that the only alternative to 'scientific creationism' is the ultra-Darwinism of the so-called new atheists.
-Tremper Longman III,
Westmont College

In this book the author invites his readers to share his own profound journey arising out of melding his formative early experience of wildlife in Africa, contemporary evolutionary accounts and creationist biblical literalism. In clear, coherent and well-argued narratives he takes apart the assumptions common to scientism and creationism and draws on the Christian tradition and biblical sources in order to construct an alternative. This is an intelligently argued yet pastorally sensitive exploration of the challenges faced by evolutionary theists and creationists alike, but its implications go much further than this. For Osborn succeeds in achieving something that few authors manage, namely, a self-critical but compassionate and sometimes humorous account of the difficulties for theists in coming to terms with suffering in the animal world. It deserves to be read and appreciated not just in student courses on God and evolution, but more widely from different ecclesial traditions.
-Celia Deane-Drummond,
University of Notre Dame

Death Before the Fall is a frank, honest and wide-ranging critique of young-earth creationism, intelligent design and other science-denying movements. Sure-footed, informed and avoiding 'tidy answers,' it shines a sober spotlight on the intellectual crises within evangelicalism - crises responsible for the enduring popularity of viewpoints dismantled by science more than a century ago. Drawing on a broad range of sources, Death Before the Fall looks to the sacrificial and self-emptying death of Christ, rather than simplistic interpretations of the fall, to understand our troubled natural history, with its unimaginable reservoirs of suffering and death.
-Karl W. Giberson

Death Before the Fall deals with the really big issues of what to make of Scripture in discussions of creation and evolution, and with the really tough challenge animal suffering brings to those discussions. But Ron Osborn shows that big issues and tough challenges can be addressed respectfully, insightfully, and with uncommon readability and humility. Irrespective of our views on the issues, this book represents the kind of informed and gracious conversation partners we want, and that we want to be.
-Joel B. Green,
Fuller Theological Seminary

▼▲
"Death Before the Fallis a refreshing look at a difficult and generally ignored aspect of theodicy. Osborn demonstrates a sensitivity not only to the complexities of the theological concerns but (perhaps more importantly) to the biblical literalists with whom he strongly disagrees." -- Kyle R. Greenwood, Bulletin for Biblical Research, 24.2

STARRED REVIEW: "Osborn has written a thoroughly distinctive book on the suffering of animals—the cruelty we impose on them and that they impose on one another. His ingenious argument is that a too-literal reading of Genesis tends to make us too complacent about animal suffering, and a more nuanced, open approach makes us better advocates for animal rights and better witnesses of the proposed coming redemption. . . . This compassionate volume should speak widely to Christians, whose environmentalism can usually use a little bolstering. Highly recommended for church groups of all denominations." -- Library Journal, February 15, 2014

"Death Before the Fall is personal, engaging, and has many important things to say about the scope, logic, and impact of biblical literalism." -- Bethany Sollereder, Reviews in Science and Religion, May 2014

"This text would be of particular interest to conservative Christians . . . concerned about animal suffering and death who are willing to move beyond literal interpretations of the creation story." -- Donna Yarri, Religious Studies Review, Vol. 41, No. 2, June 2015

"Readers will certainly find that Osborn thoughtfully and sincerely exhibits the potential implications involved in how one addresses these complex and highly-charged issues." -- Justin M. Young, Africanus Journal, 8, 2

"It is evident to me that Osborn had opened a dialog that is important and fascinating. Those who have an interest in hermeneutics (priciples of interpretation) in relation to science and theology should read this book. Whether or not you agree with specific details of Osborn's proposal, you will be informed and challenged by the very relevant issues he has presented." -- Martin Hanna, Seminary Studies, 54, Spring 2016

"This well written, thoughtful, and sensitive essay examines problematic ethical features of biblical literalism through the lens of the suffering widespread in the animal world. Questions such as the age of the Earth and whether animal predation resulted from the human fall are explored in philosophical and moral depth." -- Patricia K. Tull, The Christian Century, April 29, 2015

"Osborn offers a response to animal suffering that does not require seeing their actions as the result of a curse. . . . The book will be of particular interest to those seeking a gentle but faithful critique of creationism." -- Publishers Weekly, January 20, 2014

▼▲
I'm the author/artist and I want to review Death Before the Fall: Biblical Literalism and the Problem of Animal Suffering - eBook.
Back
Back