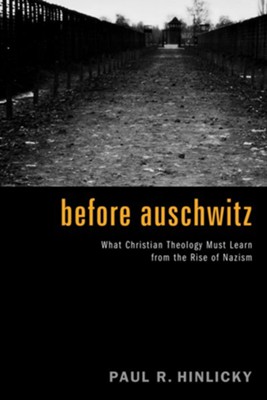 Before Auschwitz: What Christian Theology Must Learn from the Rise of Nazism - eBook

▼▲
What can Christian theology in North America learn from the rise of Nazism in Germany in the 1920s and 1930s? This book explores an explosion of scholarship in recent decades that has reopened questions once thought to be settled about the relationships between Nazism, Liberalism, and Christianity. In the process of criticizing the retrospective fallacy and urging a properly hermeneutical historiography, its method in historical theology causes us to reflect back upon our tacit commitments, suggesting that we are closer to fascism than we are aware and that, although the devil never shows its face twice in exactly the same way, the particular hubris of grasping after "final solutions" along biopolitical lines--that is, the "racially scientific" version of fascism that was Nazism--is and remains near at hand today, within our horizon of possibilities unrecognized in just the ways that it was unrecognized by Germans before Auschwitz. The book takes a fresh look at the theology of Adolf Hitler and finds themes that are disturbingly familiar. It summons to the renewal of Christian theology after Christendom in the form of critical dogmatics, where the motif of the Beloved Community replaces the fallen idol descended from Charlemagne.

▼▲
Paul R. Hinlicky is the Tise Professor of Lutheran Studies at Roanoke College, Salem, Virginia, a Docent of the Protestant Theological Faculty of Comenius University in Bratislava, and a Professor of Systematic Theology at the Institute of Lutheran Theology. He is the author of Paths Not Taken (2009), Luther and the Beloved Community (2010), Divine Complexity (2010), and with Brent Adkins, Rethinking Philosophy and Theology with Deleuze (2013).

▼▲
I'm the author/artist and I want to review Before Auschwitz: What Christian Theology Must Learn from the Rise of Nazism - eBook.
Back
Back