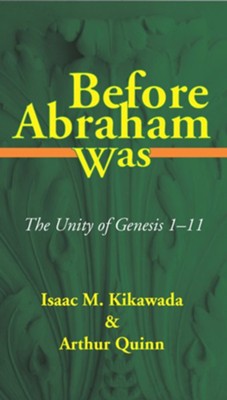 Before Abraham Was: The Unity of Genesis 1-11 - eBook

▼▲
Rebelling against a century of Old Testament scholarship, Isaac M. Kikawada and Arthur Quinn persuasively argue that the first eleven chapters of Genesis are not a literary patchwork by different editors as widely supposed, but are the work of one author of extraordinary subtlety and skill. Comparing Genesis 1-11 with primeval histories from the ancient Near East, Kikawada and Quinn urge their readers to appreciate the ingenuity of Genesis's author: "When we think we find this author napping, we had better proceed very carefully. As with Homer or Shakespeare, when you think you have seen something wrong, there may well be something wrong with your own eyes. You are more likely to be wrong than either of them." Providing a solid case for the unity of Genesis's first eleven chapters, Kikawada and Quinn move on to show how these chapters provide a formal structure for other Old Testament histories. Destined to have lasting impact on biblical scholarship, Before Abraham Was will give scholars, clergy, and students a new appreciation of critical biblical studies and a new hypothesis for the formation of Genesis.

▼▲
I'm the author/artist and I want to review Before Abraham Was: The Unity of Genesis 1-11 - eBook.
Back
Back