Skip to main content
SPRING CYBER EVENT STARTS NOW: And it's a really BIG deal! Up to 88% off through 5/24>
Mrs Beeton How to Cook / Digital original - eBook
Stock No: WW61979EB 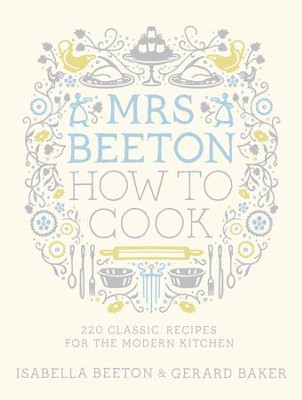 The complete guide to British cooking by our most famous cook - fully updated for the twenty-first-century kitchen.

Published to celebrate the 150th anniversary of Mrs Beeton's first publication, the 220 classic British recipes in this stunning collection are taken from the original Book of Household Management and have been updated for the twenty-first-century kitchen. Combined with sound, modern advice on how to source good food, plus detailed information on ingredients and equipment, and illustrations of all the techniques required, this is still the go-to for any aspiring or experienced home cook.

▼▲
Isabella Mary Beeton was born in London is 1836, where she grew up in a household of twenty-one children. It took Isabella four years to compile her masterwork, publishing Mrs Beeton's Book of Household Management in 1861. It contains an enormous amount of information to help people live, in Isabella Beeton's own words, 'economically, tastefully and well'. Her style, imparting information as clearly and simply as possible, was hugely influential. The book sold 60,000 copies in its first year, but Isabella Beeton died four years later, in 1865, aged just twenty-eight. The enduring popularity of Mrs Beeton's Book of Household Management is testament to the quality of her advice.Gerard Baker is a chef, food writer, broadcaster and historian. He has written extensively for The Times, The Kitchen Garden, BBC Good Food magazine and has been a specialist food contributor for BBC's national news networks and programmes for over 12 years. He has been nominated for Pick of the Year on BBC Radio Four food programme and he has made numerous television appearances; most notably on the judging panel on Rosemary Schrager's School for Cooks and as the food historian to the Hairy Bikers on their Mums Know Best BBC tour.

▼▲
I'm the author/artist and I want to review Mrs Beeton How to Cook / Digital original - eBook.
Back
Back