Skip to main content
SPRING CYBER EVENT STARTS NOW: And it's a really BIG deal! Up to 88% off through 5/24>
Bedtime for Frances
By: Russell Hoban
Stock No: WW34516 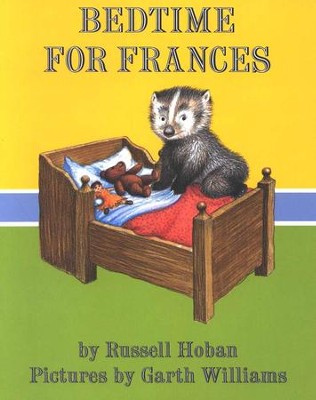 ▼▲
Famed for her many adventures, Frances made her debut with this title over thirty years ago. In this first Frances book, the little badger adroitly delays her bedtime with requests for kisses and milk, and concerns over tigers and giants and things going bump in the night. Long a favorite for the gentle humor of its familiar going to bed ritual, Bedtime for Frances is at last available with the warmth of full color enriching Garth Williams' original nuanced and touching art.

The big hand of the clock is at 12.
The little hand is at 7.
It is seven o' clock.
It is bedtime for Frances.

▼▲
I'm the author/artist and I want to review Bedtime for Frances.
Back
Back