Skip to main content
SPRING CYBER EVENT STARTS NOW: And it's a really BIG deal! Up to 88% off through 5/24>
Becoming God: The Doctrine of Theosis in Nicholas of Cusa
By: Nancy J. Hudson
Stock No: WW214726 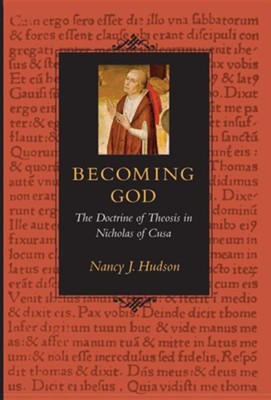 Becoming God: The Doctrine of Theosis in Nicholas of Cusa

▼▲
The Doctrine of Theosis means a salvation that is the deification of the saved. The saved actually become God. This unusual doctrine lies at the heart of Nicholas of Cusa's (1401-1464) mystical metaphysics. It is here examined for the first time as a theme in its own right, along with its implications for Cusanus' doctrine of God, his theological anthropology, and his epistemology. Nancy Hudson opens her book with a historical introduction of the term theosis from its roots in the Greek fathers (Gregory of Nyssa and Maximus the Confessor) to its mature development in Pseudo-Dionysius. The two interdependent movements of divine self-manifestation and divine mystery, immanence and transcendence, are presented as the dynamic nexus out of which theosis arises. Divine self-manifestation is explored as both a prerequisite and a mode of theosis. The negative theology that results from divine mystery highlights the limitations of human reason as well as the human mind's potential for being the image of God. doctrine of Christ as the Word of God, his understanding of the ascent of the intellect to divine Wisdom, and his concept of divine sonship. Nicholas of Cusa's emphasis on the intellect in salvation is controversial because it appears to privilege the mind over the body, undermine the goodness of creation, and ignore the place of repentance from sin in salvation. In short, Nicholas of Cusa's doctrine of theosis reveals the strong influence of Greek philosophy. At issue is his orthodoxy and whether he replaces Christian doctrine with Greek thought, while maintaining only the language of Christian theology. The thorough analysis of theosis in this book reveals that Nicholas of Cusa does indeed follow tradition, though it is the tradition of the Eastern church.

▼▲
I'm the author/artist and I want to review Becoming God: The Doctrine of Theosis in Nicholas of Cusa.
Back