We are OPEN and SHIPPING - click here for shipping estimates
PRE-SUMMER CYBER SALE: Shop over 2,500 items up to 90% off through 5/26 >
Becoming One: Emotionally, Physically, Spiritually - eBook
By: Joe Beam 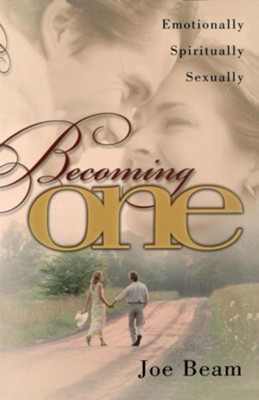 ▼▲
Open the pages of this book and learn how to experience exciting intensity in your sexual relationship, deeper levels of closeness on an emotional level, and the most fulfilling intimacy of all—spiritual ONEness.

With God's help you can make your marriage all it should be and all you crave it to be—no matter what it's like now. Men want action. Women want feeling. From day one they're set up to misunderstand each other. Sometimes you must tell your mate the things you've done wrong, and sometimes you are much better off not to tell. The secret of a strong and intimate marriage is knowing what to share and what to leave buried. If you're in conflict over sexual desires—one wants to do something other doesn't—there is a logical and spiritual way to satisfy you both. As you grow closer to God, you will grow closer to each other.

▼▲
Joe Beam is an internationally known inspirational speaker and author. He founded Beam Research Center and serves as its chairman. He has spoken to millions of people worldwide in personal appearances as well as appearances on TV and radio, including ABC’s Good Morning America, Focus on the Family, the Montel Williams Show, NBC's Today Show, The Dave Ramsey Show, The Morning Show with Mike and Juliet, and magazines such as People and Better Homes and Gardens.

▼▲
I'm the author/artist and I want to review Becoming One: Emotionally, Physically, Spiritually - eBook.
Back
×
Back
×