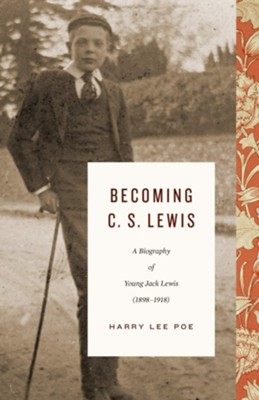 ▼▲
The pre-conversion formative years of C.S. Lewis are often overlooked by biographers in favor of his later life as a foremost Christian apologist. But Poe sees those early experiences---habits and tastes he developed in boarding school, his delight in literature, key personal relationships, his deep personal struggles and intense pursuit of joy---as seminal to all he became. 288 pages, hardcover.

This unique biography reveals how C. S. Lewis's adolescent years shaped his later writing—tracing themes such as his delight in literature, his key relationships, his suffering and struggles, and his intense pursuit of joy. Volume 1 of a new trilogy.

Harry Lee Poe (PhD, The Southern Baptist Theological Seminary) serves as the Charles Colson University Professor of Faith and Culture at Union University, where he has taught a course on C. S. Lewis for over fifteen years. He is the author of The Inklings of Oxford and C. S. Lewis Remembered, as well as numerous articles. Poe hosts regular Inklings Weekend retreats and is a speaker on Lewis at major libraries worldwide.

▼▲
I'm the author/artist and I want to review Becoming C. S. Lewis: A Biography of Young Jack Lewis.
Back
×
Back
×