We are OPEN and SHIPPING - click here for shipping estimates
PRE-SUMMER CYBER SALE EXTENDED thru 6/1 ~ Over 2,500 items up to 90% off
On Becoming Childwise: Parenting Your Child from 3 to 7 Years
By: Gary Ezzo, Robert Buckham 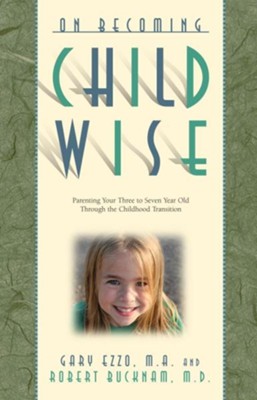 On Becoming Childwise: Parenting Your Child from 3 to 7 Years

▼▲
The growth phase between five and eight years of age, is a time when parental training and encouragement are major players in a child's developing world. These early school years awaken within a child a sense of fearful adventure in an ever-expanding world outside the confines of mom and dad. It is a time when his intellect develops sufficiently to allow purposeful interaction with adults and other children. As that interaction begins, he begins to process experiences and sensations from his deepening relationships that direct the way he interprets life. As his world unfolds, new and broader expectations are realized. Now he is confronted with role functions, norms, and expected standards of conduct which sometimes conflict with each other as well as with his own self-centered perceptions.

▼▲
I'm the author/artist and I want to review On Becoming Childwise: Parenting Your Child from 3 to 7 Years.
Back
×