Skip to main content
SPRING CYBER EVENT STARTS NOW: And it's a really BIG deal! Up to 88% off through 5/24>
Becoming the Answer to Our Prayers: Prayer for Ordinary Radicals
By: Shane Claiborne, Jonathan Wilson-Hartgrove
Stock No: WW836222 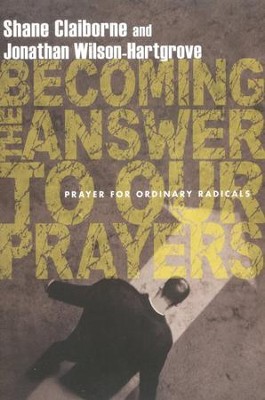 Becoming the Answer to Our Prayers: Prayer for Ordinary Radicals

▼▲
Christian activists Claiborne and Wilson-Hartgrove show you how your prayers and action must go together. Their exposition of concrete biblical examples of how a life of prayer fuels social engagement gives new meaning to feeding the hungry and advocating for international debt relief. Get ready for God to change the world through you! 132 pages, softcover from InterVarsity.

"Prayer is not so much about convincing God to do what we want God to do as it is about convincing ourselves to do what God wants us to do." —from the Introduction Activists Shane Claiborne and Jonathan Wilson-Hartgrove show how prayer and action must go together. Their exposition of key Bible passages provides concrete examples of how a life of prayer fuels social engagement and the work of justice. Phrases like "give us this day our daily bread" and "forgive us our debts as we forgive our debtors" take on new meaning when applied to feeding the hungry or advocating for international debt relief. If you hope to see God change society, you must be an ordinary radical who prays—and then is ready to become the answer to your own prayers.

Shane Claiborne is a preacher, writer and lover of Jesus. He is a graduate of Eastern University, where he studied sociology and youth ministry. Claiborne is a cofounder of The Simple Way and serves on the board of the Christian Community Development Association. He is the author of The Irresistible Revolution and coauthor of Jesus for President.


Jonathan Wilson-Hartgrove (M.Div., Duke Divinity School) is director of the School of Conversion in Durham, North Carolina, where he is a member of the Rutba House new monastic community. His books include Free to Be Bound, Inhabiting the Church and New Monasticism.

▼▲
This latest publication from the new monasticism movement is the third book each for the two young Christian activist-authors, and it offers fresh insight on the well-worn topic of prayer. Some themes are repeated from earlier works, but the book deftly succeeds in drawing the reader out of the weeds of daily life and into a more spacious field. The text is structured around three New Testament prayers: the Lord's Prayer, Christ's intercessory prayer in Chapter 17 of the Gospel of John and Paul's prayer in the first chapter of Ephesians. From the very first pronoun of the familiar Lord's Prayer ("our"), the authors extract a compelling sermon on the power and centrality of community in Christian life and thought. The dominant themethat prayer invites human beings into a partnership with God in answering prayeris enlivened with earthy tales from the authors' own lives, wrenching stories of service and redemption from the people they know and lesser-known anecdotes from Christian history and sociology. Readers will never see prayer or community in quite the same way again. (Oct.) Copyright 2008 Reed Business Information.

"We in the church are blessed by the imaginations of Claiborne, Wilson-Hartgrove, and their communities."

Claiborne enlists help from his long-time friend Jonathan Wilson-Hartgrove to address how prayer and activism are related. Take a small group through this book as you prepare for a summer mission opportunity.

Claiborne and Wilson-Hartgrove, "radical" Christians who see the danger of burnout and spiritual erosion when those who tend to the marginalized fail to pursue the divine romance that is prayer. The authors use three NT prayers to move the reader outside ordinary assumptions about prayer and challenge us to a deeper relationship with Christ.

It's both rare and refreshing to discover a new perspective on prayer. But if anyone can provide that perspective, it's Shane Claiborne and Jonathan Wilson-Hartgrove. Recommended for anyone interested in social justice, intentional communitites and the new monastics, as well as Christians who have grown beyond books on how to pray and want to learn instead how to live out the prayers they're already praying.

Like these men's other books, it is another awakening (and sometimes embarrassing) reminder that the contemporary American church is not the radical social force it was called to be.

Prayer is always a difficult topic for Christians to wrap their heads around. I'd recommend the book if you like Shane or Jonathan, or more generally if you are passionate in areas of social justice and struggle to connect that with your prayer life.

Readers will never see prayer or community in quite the same way again.

▼▲
I'm the author/artist and I want to review Becoming the Answer to Our Prayers: Prayer for Ordinary Radicals.
Back
Back