Skip to main content
SPRING CYBER SALE: The sale you've been waiting for! Up to 85% off through 5/25>
Being Human: How to become the person you were meant to be / Digital original - eBook
By: Steve Chalke
Stock No: WW68174EB 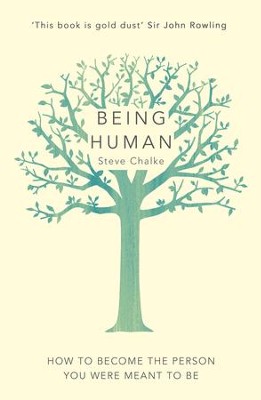 Being Human: How to become the person you were meant to be / Digital original - eBook

'Your life is precious - a precious gift. It is sacred; every moment of it. The opportunity to live rather than sleepwalk through our days belongs to us. This book is a call to wake up. It is a call to each one of us; to wake up, to live before we die.'

It's easy to sleepwalk through life without ever really considering what we're here for. But life presents us with continual opportunities to wake up - and to think about not just what we do with our lives, but who we become while living them. Ultimately it is the story that we believe about ourselves, our lives and the world around us that will shape us - for better or for worse. So where do we find a good story - a convincing narrative that makes sense of it all?

Steve Chalke suggests that Jesus' good news about the kingdom of God - a practical, lived-out expression of God's plans for the world - is the best story for us to find ourselves in. Each one of us is called to be part of the drama of the coming kingdom, and it's in this that we find a practical spirituality that helps shape our lives into everything we were meant to be.

▼▲
Steve Chalke worked as a local Baptist minister before founding Oasis Trust in 1985. Oasis now has just under 5,000 staff, as well as many more volunteers, pioneering educational, healthcare, housing and other community initiatives in the UK and around the world. He is the founder of Stop the Traffik, senior minister of Oasis Church Waterloo and UN Special Advisor on Community Action Against Human Trafficking. He has presented television and radio series for ITV and the BBC, and is the author of over forty books. In 2004 Steve was awarded an MBE for his services to social inclusion.

▼▲
I'm the author/artist and I want to review Being Human: How to become the person you were meant to be / Digital original - eBook.
Back
Back