Skip to main content
The Beckoning: Examining the Truths That Transformed an Atheist Attorney Into a Believer in God
By: Michael Minot
Stock No: WW471248 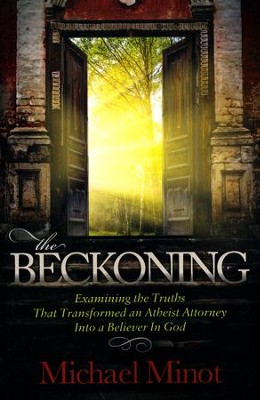 The Beckoning: Examining the Truths That Transformed an Atheist Attorney Into a Believer in God

Michael felt he was living the American dream. For a number of years he'd been reaping the professional and financial rewards of being a commercial litigation attorney. To him, life was great and getting better all the time. He first gained notoriety around his hometown as a nationally ranked tennis player. But now, years later, he was becoming known for his skills as a lawyer and as the youngest elected official in the area. And then, in his late 20s, Michael unexpectedly discovered something that turned his world and his entire idea of life upside down.

In response to a challenge from a friend, Michael agreed to investigate issues relating to science, philosophy, and the Scriptures. Comfortable with his life as an atheist, he began reading with an indifferent attitude. But what started as a casual inquiry soon turned into a time of intense research. What follows is the story of Michael's journey, his thoughts and reactions to the evidence he discovered, and the new life that soon followed.

▼▲
An Unexpected Journey From Atheism To Christianity

"In The Beckoning: Examining the Truths That Transformed an Atheist Attorney Into a Believer In God," Michael Minot details his journey from Atheism to Christianity. Engaging and thought provoking, this story provides incite into the inner workings of Michael s deeply prejudiced atheist mind and the intense struggle that occurred when he encountered God s truths.

Encouraging to fellow believers and a revelation to skeptics, Michael Minot's recounting of how he was wooed from atheism to faith is a fascinating read, unique in its approach and thorough in its layout of his case. --- Jerry B. Jenkins, Writer of theLeft Behindseries

An amazing story and superbly written. "The Beckoning" may be one of the most powerful conversion stories brought to print in the last 10 years. Page after page, so many insights I never considered before. And I've been a Christ follower for more than 40 years. An outstanding read. --- Dr. Larry Thompson, Senior Pastor, First Baptist Church of Fort Lauderdale, Florida"

▼▲
I'm the author/artist and I want to review The Beckoning: Examining the Truths That Transformed an Atheist Attorney Into a Believer in God.
Back
Back