Skip to main content
Because They Hate: A Survivor of Islamic Terror Warns America
By: Brigitte Gabriel
Stock No: WW358389 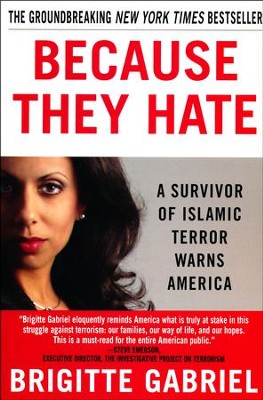 Because They Hate: A Survivor of Islamic Terror Warns America

Brigitte Gabriel lost her childhood to militant Islam, when militant Muslims from throughout the Middle East poured into Lebanon and declared jihad against the Lebanese Christians. Because They Hate warns that the US is threatened by fundamentalist Islamic theology in the same way Lebanon was-- radical Islam will stop at nothing short of domination of all non-Muslim countries.

Fiercely articulate and passionately committed, Because They Hate tells Gabriel's personal story as well as outlines the history, social movements, and religious divisions that have led to this critical historical conflict.

BRIGITTE GABRIEL is a US-based journalist and news producer who started her career as an anchor for World News, an evening Arabic news program. As a terrorism expert and the founder of the nonprofit organization ACT! for America, Brigitte Gabriel travels widely and speaks regularly on topics related to the Middle East. She has addressed audiences at the FBI, the United States Special Operations Command, the Parliament of the United Kingdom of Great Britain, and the Joint Forces Staff College, among others.

▼▲
Because They Hate should be read by all to understand radical Islam. . . This book gives dire warning of what is to come if the democratic and Western world does not take responsible action to protect its people and societies. The United States is the primary target as Islamic Radicalism attempts to spread its worldwide dominance.
Her writing is eloquent and her passion tremendous
Brigitte Gabriel eloquently reminds America what is truly at stake in this struggle against terrorism: our families, our way of life, and our hopes. Ms. Gabriel's personal account of her own experience is riveting, compelling and spellbinding. This is a must read for the entire American public . . . This book contains monumental revelations that will shock and disturb you. But it is also a story of an indomitable spirit--Brigitte's-- that will move you.
[Brigitte Gabriel's] writing is a critical wake-up call to Americans as we face the threat of takeover by jihadists. We are glad to be able to help her share her story with God-fearing, patriotic Americans who care about the truth and want to learn about the threat every nation throughout the world is facing from radical Islam.
A compelling and captivating personal story with a powerful lesson about threats to freedom in our time.
Part memoir and part analysis of the social, political, and religious factors that created the current situation in the Middle East, Gabriel issues a clear warning.
Gabriel makes her case, but also offers a sound and powerful program of what we have to do as a nation and as individuals to stave off defeat by radical Islam.
Gabriel believes the West is complacent about the threat posed by radical Islam. She learned while growing up Christian in Lebanon that Islamofascists are serious--and if we want to survive we better take them seriously. She speaks with the passion of a survivor who has seen death and destruction firsthand--and doesn't want America to suffer the same future as Lebanon.

▼▲
I'm the author/artist and I want to review Because They Hate: A Survivor of Islamic Terror Warns America.
Back
Back