Skip to main content
SPRING CYBER EVENT STARTS NOW: And it's a really BIG deal! Up to 88% off through 5/24>
Because I Said So: And Other Tales from a Less-Than-Perfect Parent - eBook
By: Dawn Meehan
Stock No: WW17723EB 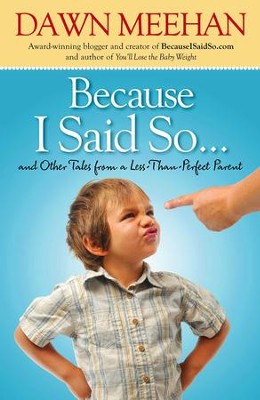 Because I Said So: And Other Tales from a Less-Than-Perfect Parent - eBook

▼▲
One of the most popular mommy-bloggers, Dawn Meehan offers readers a hilarious journey along with her six kids on madcap adventures, underscoring the notion that a sense of humor is an essential parenting skill. Poignant and amusing, this is a refreshing and instructive look at the mistakes we all make in child-rearing and a humorous testimony to parents who don't have it all figured out. Paperback.

This book is a hilarious, honest romp through motherhood—the joys, the sleeplessness, the frazzled days, the unending carpooling, the in-house refereeing, the dieting (yeah, right), the worrying—and did we say, the joy?

Here’s what some of that joy looks like—with excerpts straight from the book:

• I tried to do the Buns of Steel video, but quickly realized that it wasn’t intended for people who have buns of pudding.

• I felt like my head might explode. I kind of hoped it would so I could take a nice, peaceful ambulance ride out of there.

• I was a little at a loss. I mean, those parenting books don’t tell you how to break up a fight over an imaginary friend.

• Before you have children you can’t imagine yourself saying things like “Don’t put chocolate milk in your pants,” “Take the hot dog out of your nose,” or “Because I said so!”

If you’re a mom-to-be or a mom in the trenches, you’ll love knowing that you’re not the only one out there who sometimes just figures it out as you go along—and sometimes can’t figure it out at all. But in the end, Dawn has these words of encouragement just for you: “Enjoy this time. Even when they make you crazy, these are the best days of your life.” And they really are, aren’t they?

▼▲
Dawn lives with her six children on the outskirts of Chicago where she practices her juggling skills daily. On any given evening, Dawn can be found taking one child to cheerleading practice, dropping another off at church, making dinner, going the grocery store, paying the bills, kissing a boo-boo, reading a bedtime story, making school lunches, cleaning up muddy footprints, folding some laundry, taking a child to the ER, and writing blog posts.

After Dawn auctioned a pack of Pokemon cards on eBay, she attracted the attention of nearly a hundred thousand readers in one day. Her blog, BecauseISaidSo.com skyrocketed to become one of the most popular mommy blogs on the net.  In 2008, her blog was voted the Best Parenting Blog by The Blogger's Choice Awards. It was also nominated for the Best Humor Blog, the Hottest Mommy Blogger, and the Best Blog of All Time.

▼▲
Dawn Meehan writes a blog, Because I Said So, which has averqaged more than 32,000 hits daily. In her GUIDEPOSTS video blog she shares her parenting wisdom and offers a glimpse into her chaotic life of diaper changes, clogged toilets, muddy footprints, insurmountable piles of laundry, and never-ending car trips stores, church, school, playdates, and sporting events. Her story and interviews have been featured in many newspapers across the country. Dawn has done television interviews with ABC World News with Charles Gibson, CNN and a piece with CBS News for future airing.

▼▲
Author and mommy-blogger Dawn Meehan doesn't have to look far for material  she's knee deep in it. In Because I Said So, you'll follow her on a hilarious journey with her six kids through one madcap adventure after another. In the end, you'll come to see that a sense of humor is essential for surviving parenthood and that the greatest lessons in life are often taught by children. Because I Said So affirms that you're not alone in the daily chaos, struggles and joys of childrearing. Because as every mom knows:

▼▲
I'm the author/artist and I want to review Because I Said So: And Other Tales from a Less-Than-Perfect Parent - eBook.
Back
Back