Skip to main content
CUSTOMER APPRECIATION SALE: Thousands of starry deals through 6/22!
Because of Winn-Dixie, DVD
Stock No: WW189718 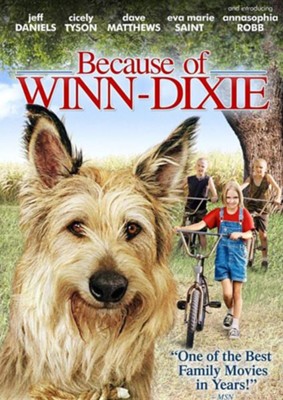 Because of Winn-Dixie, DVD

▼▲
The summer Opal and her father, the preacher, move to Naomi, Florida, Opal goes into the Winn-Dixie supermarket and comes out with a dog. A dog she dubs Winn-Dixie. Because of Winn-Dixie, the preacher tells Opal ten things about her mother, one for each year Opal has been alive. Winn-Dixie is better at making friends than anyone, and because of Winn-Dixie, Opal meets Miss Franny Block, who once fought off a bear with a copy of War and Peace. She meets Gloria Dump, who is nearly blind but sees with her heart, and Otis, an ex-con who sets the animals in his pet shop loose after hours, then lulls them with his guitar. Opal spends all that summer collecting stories about her new friends and thinking about her mother. But because of Winn-Dixie, or perhaps because she has grown, Opal learns that friendship--and forgiveness--can sneak up on you like a sudden summer storm. Recommended for ages 8 and up. Rated PG, approximate running time is 109 minutes.
Special Features:

▼▲
I'm the author/artist and I want to review Because of Winn-Dixie, DVD.
Back
Back