Skip to main content
Because of Christ
By: Carl E. Braaten
Stock No: WW665936 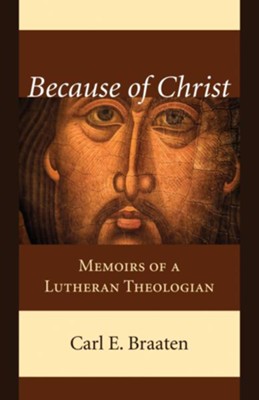 ▼▲
Carl Braaten's memoirs tell the story of his life as a theologian, from his early years as a missionary kid in Madagascar to his years of study at the universities of Paris, Harvard, Heidelberg, and Oxford to his decades of teaching. Throughout the book, he delves into the many theological movements, controversies, and personalities that shaped his thinking and writing. Braaten's fight for the faith is reflected in his theological workR13;spoken and writtenR13;that tangles with the ""isms"" of the surrounding culture of American religion. Because of Christ is more than simply a biography; it is a chronicle of the chief theological conflicts of the twentieth century that put the integrity of the gospel to the test. Carl E. Braaten is one of the leading theologians in American Lutheranism. He taught Systematic Theology for a generation at Lutheran School of Theology at Chicago and was founding editor of the popular theological journal Dialog. He has written or edited many foundational works in Lutheran theology, among them is a two-volume Christian Dogmatics (1985) edited with Robert Jenson, and Justification: The Article by Which the Church Stands or Falls (1990). For thirteen years Braaten has been director of the Center for Catholic and Evangelical Theology and editor of its journal, Pro Ecclesia.

▼▲
I'm the author/artist and I want to review Because of Christ.
Back