We are OPEN and SHIPPING - click here for shipping estimates
How God Became King: The Forgotten Story of the Gospels - eBook
By: N.T. Wright 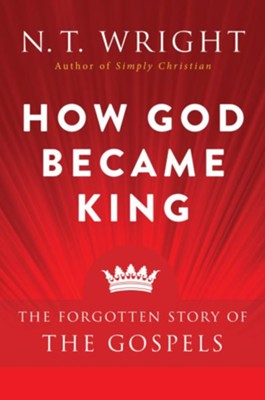 How God Became King: The Forgotten Story of the Gospels - eBook

▼▲
New Testament scholar N.T. Wright demonstrates how we have been misreading the Gospels for centuries, powerfully restoring the lost central story of the Scripture: that the coronation of God through the acts of Jesus was the climax of human history.

Wright fills the gaps that years of misdirection have opened up in our collective spiritual story, tracing a narrative from Eden, to Jesus, to today. Wright's powerful re-reading of the Gospels helps us re-align the focus of our spiritual beliefs, which have for too long been focused on the afterlife.

Instead, How God Became King: The Forgotten Story of the Gospels shows us why we should understand that our real charge is to sustain and cooperating with God's kingdom here and now. Echoing the triumphs of Simply Christian and The Meaning of Jesus, Wright's How God Became King is required reading for any Christian searching to understand their mission in the world today.

Wright offers an opportunity to confront these powerful texts afresh, as if we are encountering them for the first time. How God Became King reveals the surprising, unexpected, and shocking news of the gospels: this is the story of a new king, a new kind of king, a king who has changed everything, and a king who invites us to be part of his new world.

Foundational: The four gospels come directly fromthe ancient church and are among the primary sourcesfor the church's teachings.

Familiar: Since Christian worship services began, areading from the gospels has played a central role.

Studied: For over two hundred years scholars havechallenged and defended the central claims of thegospels: miracles, historical accuracy, the divinity ofJesus, and more.

But Forgotten: Still, leading Bible scholar N. T.Wright reveals shocking news: We have all forgottenwhat the four gospels are about.

"Despite centuries of intense and heavy industryexpended on the study of all sorts of features of thegospels," Wright writes, "we have often managed tomiss the main thing that they, all four of them, aremost eager to tell us. What we need is not just a bitof fine-tuning, an adjustment here and there. We needa fundamental rethink about what the gospels aretrying to tell us."

What Wright offers is an opportunity to confront thesepowerful texts afresh, as if we are encountering themfor the first time. How God Became King reveals thesurprising, unexpected, and shocking news of thegospels: this is the story of a new king, a new kind ofking, a king who has changed everything, and a kingwho invites us to be part of his new world.

▼▲
“Wright has never been more eloquent and persuasive than in this book that… caps a long, productive theological career.”
“Scholarly, accessible, insightful and challenging . . . an excellent and provocative book.”
“The prolific Christian apologist N.T. Wright… now devotes an entire volume, ‘How God Became King’ to this trendy subject. Wright’s insistence that Christianity has got it all wrong seems to mark a turning point for the serious rethinking of heaven.”
“We often read the beginning and the end of the Gospels without the large middle where the message of the kingdom rings loud and clear. I recommend to everyone who wants to understand the Gospels’ message in a way that will not only inform the intellect but also transform life.”
“Tom Wright continues to urge and prod and propose how the church can regain a kingdom footing and end its empire heritage. And, he shows us how we can reshape both what we think about Jesus and how we follow him in our world.”
“Wright is a scholar who writes as if the material he engages actually matters for the church and the world it lives in… and has again done the church a great favor in presenting the gospel story as the story of God and his kingdom on earth.”

▼▲
I'm the author/artist and I want to review How God Became King: The Forgotten Story of the Gospels - eBook.
Back
×
Back
×