Skip to main content
CUSTOMER APPRECIATION SALE: Thousands of starry deals through 6/22!
I Became a Christian and All I Got Was This Lousy T-Shirt - eBook
By: Vince Antonucci
Stock No: WW6379EB 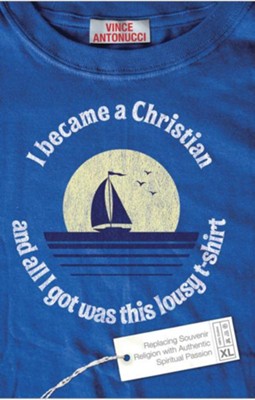 ▼▲
Are you feeling spiritually bored? Do you come away from church asking "Is this it?" If you're craving a fresh perspective on Christianity, get ready to experience a faith that's exciting, beautiful, and powerful! Using provocative stories and raw honesty, Antonucci shows how Jesus lived---and reveals what he wants and expects from his followers. 208 pages, softcover from Baker.

▼▲
Many people find themselves asking, "Is this it?"
"We all read about the life Jesus describes and are painfully aware that our lives don't match his words," says Vince Antonucci, a disarmingly funny and edgy pastor. Raised by a Jewish mother and abandoned by his professional poker-playing father, Antonucci found Jesus at age twenty after studying the New Testament. When he finally went to church, he was disappointed to discover a "boring, stale religion."
Through provocative storytelling and raw honesty, Antonucci unearths the life Jesus lived and wants us to experience, challenging us to move past spiritual boredom into a faith that's exciting, beautiful, and powerful. Recommended for all Christians thirsty for a fresh perspective on Christianity.

▼▲
Vince Antonucci is the founder and lead pastor of Verve, an innovative church plant for the unchurched near the Las Vegas strip. Vince's passion is creatively communicating biblical truth to help people find God, and he also serves with the Emerging Leadership Initiative (ELI). He is the author of I Became a Christian and All I Got Was This Lousy T-Shirt and Guerrilla Lovers.

▼▲
In this ultimately disappointing book, Antonucci, a Virginia-based pastor, criticizes the superficial subculture of American Christianity. Antonuccis working assumption is that many Christians are actually disenchanted by their spiritual lives and wonder why they dont have the abundant life Jesus promised. The solution to this deadening state of affairs? Christians need to shake loose the trite trappings of Christian-speak and get back to the adventure of faith. Antonucci takes aim at some of the beloved shibboleths of evangelicalism, suggesting, for example, that instead of talking about having a relationship with Jesus, Christians should worry about whether (as per John 15) they abide in Jesus. Some of his turns of phrase are thought provoking, as when he urges readers to be the good news before they worry about sharing it. But his autobiographical vignettes go on too long, and his messagethat the Bible asks us not to behave well or even to believe in Jesus, but to follow himis not greatly different from many Christian-living books. Too often, Antonucci replaces the clichés he disdains with more platitudes. On prayer: spending large quantities of quality time with Godface-to-face will make believers glow. In short, this book promises more than it delivers. (Feb.) Copyright 2008 Reed Business Information.

▼▲
I'm the author/artist and I want to review I Became a Christian and All I Got Was This Lousy T-Shirt - eBook.
Back
Back