Skip to main content
Beautycare for the Tongue, updated edition
By: Leroy Koopman
Stock No: WW5430372 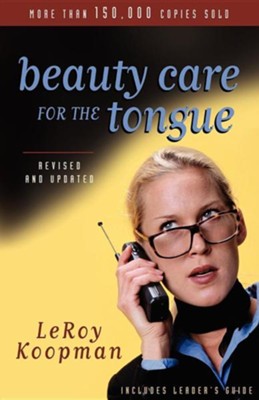 Beautycare for the Tongue, updated edition

▼▲
Do the words that come out of our mouths enhance or hurt our testimony? If we know that gossip, anger, lies, and complaints hurt God and those around us, why don't we control our tongues? This best-selling book will take you step-by-step, through the purification of you tongue, so that your speech may be a fragrant sacrifice to God, not to mention those around you.

▼▲
An insightful look at how to make the tongue an instrument of sharing beauty instead of spreading venom and injury. Over 150,000 copies in print

Tell us a little about yourself.  I'm an ordained minister in the Reformed Church in America. I served congregations in Stickney, Illinois; Morrison, Illinois; and Pompano Beach, Florida, for 15 years before becoming associate editor of the Church Herald in 1975. In 1979 I joined the staff of the Reformed Church in America as a writer and editor, a position I held until retirement in April of 2000. Throughout most of this time I continued to do freelance writing (14 books, etc.)

What was your motivation behind this project?  Beauty Care for the Tongue was originally written as a study book for the Women's Department of the Reformed Church in America. It was republished by Zondervan in 1974, where it went through 18 printings and sold 150,000 copies. Even though the book has been out of print for about 20 years I have continued to receive requests for it, so I am grateful that Kregel has agreed to republish it. The book has been extensively updated.

Anything else you'd like readers / listeners to know:  "Many of our women have said this has made a real difference in their lifestyloe. This, without question, has been the most meaningful and easiest lesson book to present of any ever supplied us." That letter, from a women's church group in New York, is typical of the many I have received.