Skip to main content
Beauty Among Ruins
By: J'nell Ciesielski
Stock No: WW233565 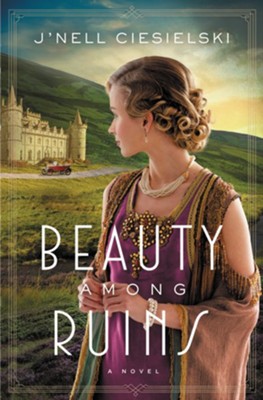 ▼▲
Banished overseas for her frivolous ways, American socialite Lily Durham ends up at crumbling Scottish Kinclavoch Castle nursing soldiers wounded in the Great War. Secretly intrigued by this lively woman, withdrawn laird Alec MacGregor teams up with her to solve a series of mysterious events. Can they put their differences aside and find the culprit? 368 pages, softcover from Nelson.

In Ciesielski’s latest sweeping romance, an American heiress finds herself in Scotland amid the fallout of the Great War, and a wounded Scottish laird comes face-to-face with his past and a woman he never could have expected.

American socialite Lily Durham is known for enjoying one moment to the next, with little regard for the consequences of her actions. But just as she is banished overseas to England as a "cure" for her frivolous ways, the Great War breaks out and wreaks havoc. She joins her cousin in nursing the wounded at a convalescent home deep in the wilds of Scotland at a crumbling castle where its laird is less than welcoming.

Alec MacGregor has given his entire life to preserving his home of Kinclavoch Castle, but mounting debts force him to sell off his family history bit by bit. Labeled a coward for not joining his countrymen in the trenches due to an old injury, he opens his home to the Tommies to make recompense while he keeps to the shadows. But his preference for the shadows is shattered when a new American nurse comes streaming into the castle on a burst of light.

Lily and Alec are thrown together when a series of mysterious events threatens to ruin the future of Kinclavoch. Can they put aside their differences to find the culprit before it’s too late, or will their greatest distraction be falling in love?

Praise for Beauty Among Ruins

"A satisfying and highly enjoyable read that I recommended for readers of historical fiction, mystery, and romance." —Tea Cooper, author of The Woman in the Green Dress

With a passion for heart-stopping adventure and sweeping love stories, J’nell Ciesielski weaves fresh takes into romances of times gone by. When not creating dashing heroes and daring heroines, she can be found dreaming of Scotland, indulging in chocolate of any kind, or watching old black and white movies. Winner of the Romance Through the Ages Award and the Maggie Award, she is a Florida native who now lives in Virginia with her husband, daughter, and lazy beagle. Learn more at www.jnellciesielski.com.

▼▲
'A Scottish lord and an American socialite discover love during WWI in this gorgeous historical romance from Ciesielski (The Socialite). . . The undercurrent of mystery and Ciesielski's unflinching approach to the harsh realities of wartime only enhance the love story. Readers are sure to be impressed.' --Publishers Weekly -- Publishers Weekly Starred Review

▼▲
I'm the author/artist and I want to review Beauty Among Ruins.
Back
×
Back
×