Skip to main content
Beautiful Stories from Shakespeare for Children
By: E. Nesbit
Stock No: WW582745 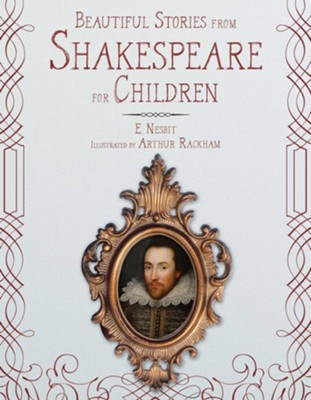 Beautiful Stories from Shakespeare for Children

▼▲
Beautiful Stories by Shakespeare for Children is a wonderful collection of works by Shakespeare, abridged and adapted to be more easily read by young children. Includes some of William Shakespeare's most famous works, paired with classic illustrations by Golden Age illustrator Arthur Rackham. Includes the stories: The Tempest; Romeo and Juliet; A Midsummer Night's Dream; Hamlet, Prince of Denmark; As You Like It; King Lear; The Taming of the Shrew; Cymbeline; Twelfth Night, or, What you Will; The Winter's Tale; Pericles, Prince of Tyre; The Comedy of Errors; Macbeth; Othello; and The Merchant of Venice. Recommended for ages 8 to 14 years.

▼▲
William Shakespeare is arguably the most pivotal and widely read figure in the history of English literature. This comprehensive collection highlights some of the bard’s best works, adapted to be more easily read and digestible for children.

Featured within are some of the bard’s most famous and compelling works, including: Paired alongside gorgeous classic illustrations by notable Golden Age illustrator Arthur Rackham, Beautiful Stories from Shakespeare for Children makes a magnificent gift and great addition to any young reader’s budding library.

▼▲
E. Nesbit was a prolific English author, editor, and poet. Throughout her career, she penned or contributed to more than sixty works of fiction, poetry, picture books, and compilations of literature, although her primary success came from her children’s books. She died in 1924, possibly due to lung cancer.

Arthur Rackham is often considered a primary figure in the Golden Age of book illustration. Born in Lewisham, England, in 1867, Rackham spent the majority of his life dedicated to his career in illustrating. His work has been featured in some of the most desirable editions of classic works, such as Rip Van Winkle, A Midsummer Night’s Dream, Fairy Tales from the Brothers Grimm, Gulliver’s Travels, Mother Goose, The Wind in the Willows, and many more. He died in 1939 in Limpsfield, Surrey.

▼▲
I'm the author/artist and I want to review Beautiful Stories from Shakespeare for Children.
Back
Back