We are OPEN and SHIPPING - click here for shipping estimates
PRE-SUMMER CYBER SALE EXTENDED thru 6/1 ~ Over 2,500 items up to 90% off
Beautiful Bandit - eBook
By: Loree Lough 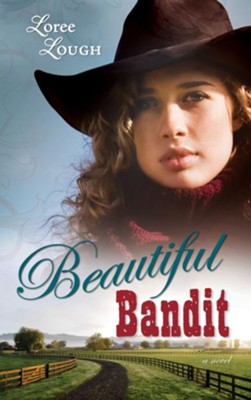 ▼▲
Joshua Neville is a quiet, even-keeled rancher who was just minding his own business when he witnessed a brazen bank robbery in San Antonio, Texas, that left three men dead. Even more shocking than the heist itself is that the ringleader looked like a woman!
Having escaped a gang of robbers who forced her to participate in a bank heist, Kate Wellington adopts an alias and decides to flee to Mexico. Lost and hungry, she stumbles upon the camp of a man named Josh Neville who offers to escort her across the border. But when she injures her ankle, the kindly cowboy takes "Dinah" home to his ranch to heal, instead.
As the two grow closer, Josh realizes he’s fallen in love, even as he learns the truth about Dinah. But does he know the whole story? And, after the truth comes out, will he put his life at risk to keep her with him?

▼▲
Once upon a time, best-selling author Loree Lough literally sang for her supper, performing before packed audiences throughout the U.S. Now and then, she blows the dust from her six-string to croon a tune or two for her grandchildren, but she mostly just writes. Over the years, her stories have earned nearly 100 industry and Readers’ Choice awards, seven movie options, and over eighty four- and five-star reviews.
Loree has nearly seven million copies of her books in circulation. She has written more than 100 books, thousands of articles, and many short stories. Loree loves sharing learned-the-hard-way lessons about the craft and the industry, and her comedic approach to teaching makes her a favorite (and frequent) guest of writers’ organizations, book clubs, private and government institutions, and college and high school writing programs in the U.S. and abroad.
A writer who believes in "giving back," Loree dedicates a portion of her income to Soldiers’ Angels, Special Operations Warrior Foundation, and several other worthwhile organizations. She splits her time between her home in the Baltimore suburbs and a  cabin in the Allegheny Mountains, sharing both with her real-life hero, Larry, who rarely complains, even when she adds yet another item to her vast collection of lighthouses, wind chimes, "wolf stuff."

▼▲
I'm the author/artist and I want to review Beautiful Bandit - eBook.
Back
×
Back
×