Skip to main content
Beating Guns: Hope for People Who Are Weary of Violence
By: Shane Claiborne, Michael Martin
Stock No: WW434136 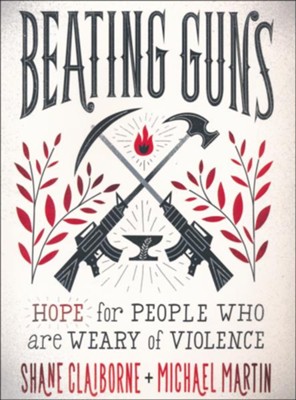 Beating Guns: Hope for People Who Are Weary of Violence

▼▲
Representing less than 5% of the world's population, Americans own nearly half of the world's guns. We tally 90 gun deaths a day due to homicide, suicide, and accidents, or roughly 33,000 a year. We have both a gun problem and a heart problem. The authors want us to re-imagine a world where swords are turned into plows and guns into garden tools. 256 pages, softcover.

Parkland. Las Vegas. Dallas. Orlando. San Bernardino. Paris. Charleston. Sutherland Springs. Newtown. These cities are now known for the people who were shot and killed in them. More Americans have died from guns in the US in the last fifty years than in all the wars in American history. With less than 5% of the world's population, the people of the US own nearly half the world's guns. America also has the most annual gun deaths--homicide, suicide, and accidental gun deaths--at 105 per day, or more than 38,000 per year. Some people say it's a heart problem. Others say it's a gun problem. The authors of Beating Guns believe it's both.

This book is for people who believe the world doesn't have to be this way. Inspired by the prophetic image of beating swords into plows, Beating Guns provides a provocative look at gun violence in America and offers a clarion call to change our hearts regarding one of the most significant moral issues of our time. Bestselling author, speaker, and activist Shane Claiborne and Michael Martin show why Christians should be concerned about gun violence and how they can be part of the solution. The authors transcend stale rhetoric and old debates about gun control to offer a creative and productive response. Full-color images show how guns are being turned into tools and musical instruments across the nation. Charts, tables, and facts convey the mind-boggling realities of gun violence in America, but as the authors make clear, there is a story behind every statistic. Beating Guns allows victims and perpetrators of gun violence to tell their own compelling stories, offering hope for change and helping us reimagine the world as one that turns from death to life, where swords become plows and guns are turned into garden tools.

▼▲
Shane Claiborne is a bestselling author, renowned activist, and sought-after speaker, and is a self-proclaimed "recovering sinner." He writes and speaks around the world about peacemaking, social justice, and Jesus, and is the author or coauthor of numerous books, including The Irresistible Revolution, Jesus for President, and Executing Grace. Claiborne is the visionary founder of The Simple Way in Philadelphia and president of Red Letter Christians. His work has been featured in the Wall Street Journal, Christianity Today, Esquire, and SPIN and on Fox News, NPR, and CNN. He did graduate work at Princeton Seminary and received an honorary doctorate from Eastern University. Claiborne lives in Philadelphia, Pennsylvania. Follow him on Twitter (@shaneclaiborne), on Facebook (ShaneClaiborne), and at www.redletterchristians.org.

Michael Martin is founder and executive director of RAWtools Inc. and blogs at RAWtools.org. RAWtools turns guns into garden tools (and other lovely things), resourcing communities with nonviolent confrontation skills in an effort to turn stories of violence into stories of creation. RAWtools has been featured in the New York Times and on Inside Edition and NPR. Martin previously served as a youth and young adult pastor in the Mennonite church and lives in Colorado Springs, Colorado.

▼▲
I'm the author/artist and I want to review Beating Guns: Hope for People Who Are Weary of Violence.
Back