Skip to main content
CUSTOMER APPRECIATION SALE: Thousands of starry deals through 6/22!
A Beastly Christmas: A Comedy For All Ages
By: John O. Eby
Stock No: WW023829 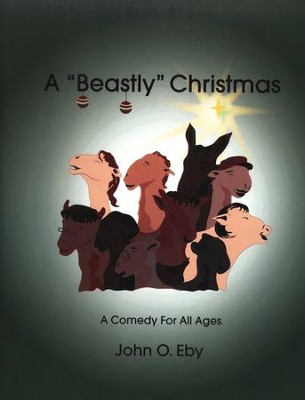 A Beastly Christmas: A Comedy For All Ages

▼▲
This Christmas play is based on the familiar song "The Friendly Beasts". This program portrays what the animals might have been thinking as they witnessed the birth of Jesus-- if they had human minds. This production allows various parts of the congregation to partake in. Recommended for all ages.

▼▲
Centering around the theme of the familiar song "The Friendly Beasts," this intriguing program depicts what the animals who witnessed Jesus' birth might really have been thinking -- if they had human minds. There's humorous interplay among camels, sheep, cows, and the donkey that carried the pregnant Mary as they share their unique perspective on the nativity. This complete presentation allows many different parts of the congregation to participate; speaking roles can be performed in a readers' theater format by adults or youth, young children can portray the humans at the manger in a silent tableau, and musical selections allow the choir to be involved, as well. This adaptable drama can be used not only in church settings, but also in schools or for children's programs. As an added feature, customers with PowerPoint and broadband capability may obtain access to a downloadable PowerPoint presentation to accompany the drama at (http: //www.csspub.com/BeastlyChristmas/).
A companion coloring book for young children, based on the imagery in the PowerPoint file, is also available in packages of five.
John O. Eby has been an ordained pastor for four decades, serving several Baptist congregations in California. He is currently the pastor of First Baptist Church in Porterville, California. A graduate of the University of LaVerne and American Baptist Seminary of the West, Eby is the author of more than 30 skits and plays.
Natividad Briones is a member of the worship team at First Baptist Church in Porterville, California. A veteran of the U.S. Navy and merchant marine, Briones began drawing caricatures of fellow sailors. He subsequently did freelance cartooning, and he had prepared composite sketches for the Los Angeles Police Department and the Tulare County Sheriff's Department.

▼▲
I'm the author/artist and I want to review A Beastly Christmas: A Comedy For All Ages.
Back
Back