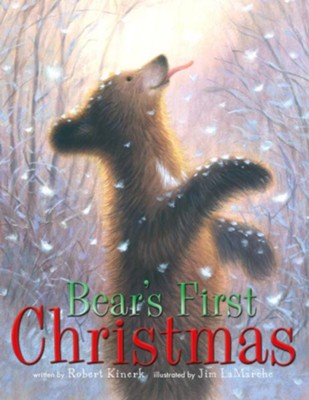 ▼▲
In the dark of winter, deep in the woods, a lone bear is awakened from his winter sleep by a soft and mysterious sound. Under the stars the bear finds his way step by step through the snowy forest, making friends along his route. Then the bear discovers a place in the woods that glows magically with something he and his friends could never have imagined -- their first Christmas.

Robert Kinerk's inspired story and Jim LaMarche's glimmering illustrations combine in a picture book that captures the joy and spirit of Christmas. Come along with bear and his friends and see the magical light of Bear's First Christmas.

▼▲
Robert Kinerk is the author of Clorinda, illustrated by Steven Kellogg, which was an IRA Children's Book Award Notable Book, and about which Booklist said in a starred review, "Much applause for Clorinda." Mr. Kinerk grew up in Alaska and has worked as a journalist and playwright. He now lives with his wife, Anne, in Cambridge, Massachusetts.

Jim LaMarche is one of the most talented artists working in children’s books today. His many successful books include Rainbabies by Laura Kraus Melmed and Albert by Donna Jo Napoli, which was selected as a New York Times Best Illustrated Book; and Up and Raft, which he also wrote. Most recently he illustrated The Carpenter’s Gift by David Rubel and Puma Dreams by Tony Johnston. Jim lives in Santa Cruz, California.

▼▲
I'm the author/artist and I want to review Bear's First Christmas.
Back