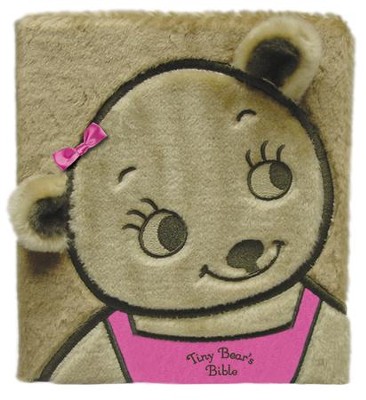 ▼▲
Snuggle up with your little girl and read about how much God loves his children. With a fuzzy cover that's soft to touch, your kids will love listen and cuddle up with their Bible. Features 11 Bible stories. Recommended for ages 2-5.

A bear to hug, a Bible to love, and a promise to treasure: God loves you! Tiny Bear’s Bible is a warm and fuzzy reminder of how God loves his children—in a format kids can cuddle. Together with their friend Tiny Bear, children discover eleven Bible stories in a book they can carry with them wherever they go. Bestselling author, Sally Lloyd-Jones presents some of the most familiar Bible stories to children, which provides parents and grandparents lots of teachable, cuddly moments as they explore God’s love together.

Sally Lloyd-Jones is a leading writer of inspirational books for children. She is the author of three bestselling children’s Bibles, including the Moonbeam Award winner and ALA notable The Jesus Storybook Bible, as well as Thoughts to Make Your Heart Sing, winner of the ECPA Inspirational Book award. She has written many picture books for children, such as the critically acclaimed New York Times bestseller How to Be a Baby: By Me, the Big Sister and Song of the Stars. Sally was born and raised in Africa, was schooled in England, and now lives in New York City. She can be found at http://www.sallylloyd-jones.com.

Igor Oleynikov has been drawing since early childhood. He grew up in Lubertsy, Russia, a satellite town of Moscow where he lived with his mother, a carpet designer, and his father, an engineer. Oleynikov has illustrated more than 25 children’s books from publishers around the world. He now lives Moscow with his wife and is a proud father and grandfather.

▼▲
I'm the author/artist and I want to review Tiny Bear's Bible, Board Book, Faux Fur, Pink.
Back
×
Back
×