Skip to main content
BIBLE SALE OF THE SEASON: For a Limited Time ~ Save on over 1,100 Bibles!
Bearded Gospel Men: The Epic Quest for Manliness & Godliness
By: Jared Brock, Aaron Alford
Stock No: WW099305 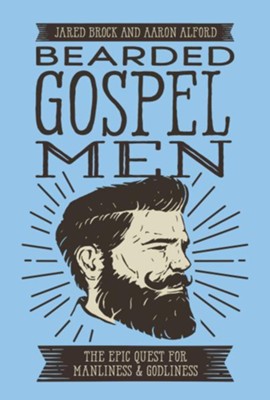 ▼▲
Of course, Bearded Gospel Men is about more than just beards. It's about manliness and godliness, both of which seem to be in short supply these days. Each of the 31 stories in this book includes a verse of the day, a quote to contemplate, and a prayer--all geared to inspire men toward embracing their follicular faithfulness and joining a large conversation about living faithfully in a world that desperately needs the gospel. So dive in and enjoy the woolly wisdom of these bearded gospel men! Paperback.

A Devotional That Dudes Will Actually Read!

Is there a connection between hairiness and holiness? Some would say a hearty "Yes!" In fact, the world is in the middle of a beard mania. Events like Movember and Decembeard are becoming global movements and manly sites are appearing all over the internet. Is this just another fad? And what does it say that so many of the most famous Christian communicators have or did have a beard?

Throughout history, Christian men have gloried in male pattern magnificence. Saint Benedict of Nursia wore a superb double forker. The benevolently-bushed Euthymius wouldn’t allow clean-shaven monks to enter his Judean Desert monastery. St. Francis of Assisi had a beard, and now there’s a Pope named after him. He’s clean-shaven, but we’re praying for him.

Of all the great Christian men who wore beards, none stands so highly as the headless martyr Sir Thomas More. On the day of his beheading, the tufted knight supposedly positioned his beard away from his soon-to-be-severed neck, saying: "My beard has not been guilty of treason, and it would be an injustice to punish it."

But of course, Bearded Gospel Men is about far more than beards – it’s about manliness and godliness. Through this 31-day devotional, men are inspired to rise to a higher calling. The humor and facial hair is the perfect means to have a broader conversation about living a faithful life.

So, let’s study some of these famous Bearded Gospel Men!

Jared Brock is the co-founder of Hope for the Sold, a non-profit organization dedicated to combating human trafficking, and the author of A Year of Living Prayerfully. He’s happily married to his best friend, Michelle, and his writing has appeared in Esquire, Catalyst, Relevant, Huffington Post, Elite Daily, TODAY.com, and Writer’s Digest. Brock runs a documentary production company, is the director of the film Red Light Green Light, and has been interviewed on 100 Huntley Street and The 700 Club.

Aaron Alford is originally from Ontario, Canada. He has studied improv at The Second City, hitchhiked across Ireland and Italy, and, as a missionary with Youth With A Mission in Modesto, California, helps run a street caf&eacute; for the homeless with his friends. He enjoys beautifying the world with whimsy, compassion, pipe smoke, and an admirable beard.

▼▲
I'm the author/artist and I want to review Bearded Gospel Men: The Epic Quest for Manliness & Godliness.
Back
Back