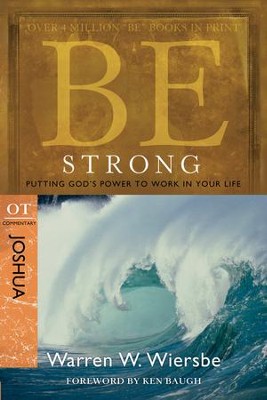 ▼▲
God isn't looking for volunteers, because every Christian is a soldier in the army of the Lord. Some are "good soldiers of Jesus Christ" while others are AWOL or casualties on the battlefield of life.

Joshua was one of God's early soldiers on the winning side. Thrust into leadership when Moses died, Joshua took to heart God's instructions about the keys to victory. Putting fear aside and realizing the Lord was his true source of strength, Joshua became God's instrument for bringing the Israelites safely into the Promised Land.

As you study the Book of Joshua, you will learn:

Dr. Warren W. Wiersbe is best known as an author, pastor, and radio Bible teacher. He was for seven years pastor of Chicago's Moody Memorial Church and most recently served as General Director and Bible teacher for Back to the Bible. He has authored over 100 books, including the New Testament and Old Testament "BE" series from Victor Books.

It can seem as though today's culture encourages weakness, not strength. And this attitude has crept into the church: Don't take a strong position of faith. Don't take a strong view of evangelism. Don't maintain strong moral values. Yet God's people are called to be soldiers, and to fight for His cause and kingdom. Based on the book of Joshua, Be Strong is an inspiring guide to pursuing a victorious life.

Part of Dr. Warren W. Wiersbe's best-selling "BE" commentary series, Be Strong has now been updated with study questions and a new introduction by Ken Baugh. A respected pastor and Bible teacher, Dr. Wiersbe shares the need for strong, dedicated believers. You'll discover how to dodge defeat, pursue your purpose, and take hold of all God has in store for you.

▼▲
I'm the author/artist and I want to review Be Strong - eBook.
Back
Back